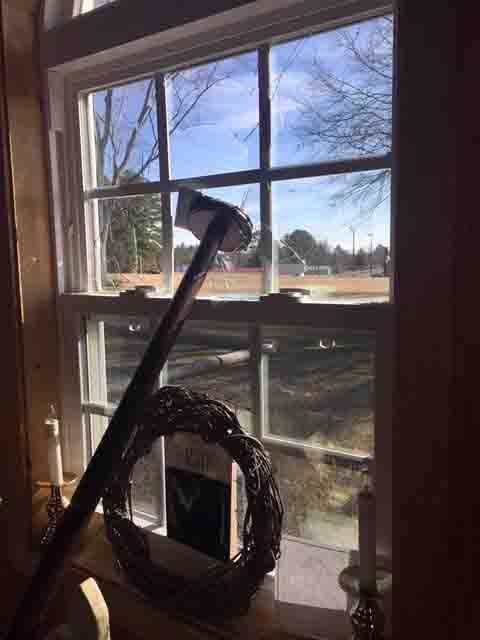 This window was vandalized at a prayer chapel on the campus of Bethpage United Methodist Church in Kannapolis. Rowan authorities are looking for the person who damaged the property. Submitted photo

KANNAPOLIS — Despite two recent crimes at his church, a Kannapolis pastor has asked the community to pray for those responsible.

Rowan County Sheriff’s Office investigators say they are looking into who vandalized Bethpage United Methodist Church. The vandalism comes a few months after a man was charged late last year with breaking into the church’s Boy Scouts trailer.

Someone damaged the prayer chapel at the church, located at 109 Fellowship Ave., between at 6 p.m. Saturday and 1:30 p.m. Monday. According to a department report, nothing was taken but someone broke windows and other items that were strewn about the floor.

“We are surprised that somebody would do this,” said Pastor Mark Vickers.

The chapel, which sits a few yards from the church on a 22-acre property, has always been open to people who need to pray while traveling, Vickers said.

“We always wanted it to be a place of spiritual refuge for families who need to have some time with God,” Vickers said.

The church has been looking into installing surveillance video or another security system.

Vickers said it’s unfortunate that the church has had to consider investing in such security measures. The church has a team that has been addressing these issues for a few months.

He said the damage will take time to repair and is costly but minimal. He encouraged church members to “continue to pray for those who felt the need to do this” and said the chapel continues to be a sanctuary for those in need and a place to find God.

In November, Rowan County authorities charged Jason Sheets with breaking into the Scout trailer. The trailer held camping supplies and equipment. Authorities said the church determined Sheets was living on the church property and investigators said he had stolen the items and used them to keep warm at a makeshift campsite.

Anyone with information about the latest incident is asked to contact the Rowan County Sheriff’s Office at 704-216-8700 or Salisbury-Rowan CrimeStoppers at 866-639-5245.

A Statesville man faces multiple charges, one of which includes a theft from his employer in Cleveland. On Nov. 26,... read more