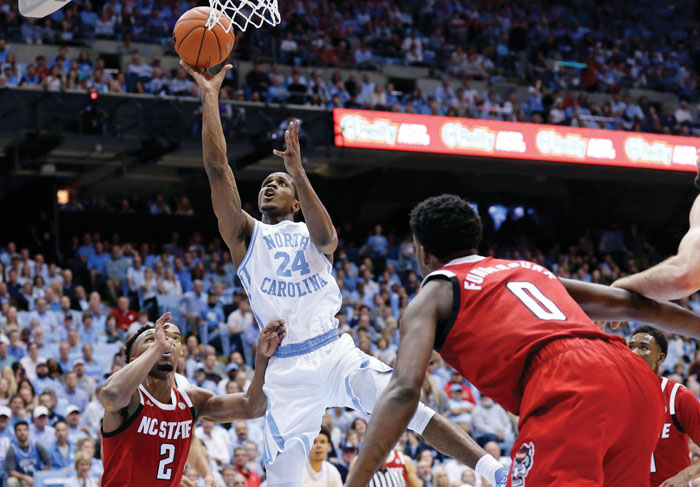 Maye had a season-high 31 points to go with 12 rebounds, helping the eighth-ranked Tar Heels beat the Wolfpack 113-96 on Tuesday night for their sixth straight win.

Maye finished 10 of 15 from the field and made all 10 of his free throws for the Tar Heels (18-4, 8-1 Atlantic Coast Conference). He had managed 21 points in last month’s first meeting in Raleigh, and this one came five days shy of a full year since he went for a career-high 33 points (27 after halftime) on the Wolfpack’s home court.

“I think just from being in-state, I think I just try to play as hard as I can,” Maye said, “and have a little bit more fire playing against an in-state team.”

Asked why Maye keeps having such big nights against the Wolfpack, coach Roy Williams had a simple response: “If I knew that, I’d get him to do that against everybody.”

Yet it was merely the latest strong performance in North Carolina’s surge since a 21-point loss to Louisville on Jan. 12 that stood as Williams’ worst at home since taking over in Chapel Hill. UNC shot 56 percent, dominated the glass (41-27) and repeatedly got to the line (31 of 37). And the Tar Heels turned a 56-40 halftime lead to a 27-point margin early in the second half before posting the second-most points ever allowed by the Wolfpack in any game.

Braxton Beverly scored 17 points for N.C. State, which was coming off a woeful 24-point showing in Saturday’s loss to Virginia Tech. N.C. State warmed back up to shoot 50 percent but was unable to keep up once the Tar Heels got rolling.

“I think everybody knows that my teams are going to compete and play hard,” Wolfpack coach Kevin Keatts said. “We’re not going to always do everything right. Now our biggest challenge is playing smarter. We have to start comprehending more things and taking away people’s strengths as opposed to letting guys get to their strengths.”

N.C. State: There was a looming question of how the Wolfpack would regroup after sputtering to 24 points against the Hokies — the lowest scoring total for any ACC team in the shot-clock era. N.C. State also shot 16.7 percent in that game, the worst mark in league history. Things came much easier this time on the offensive end at least, with N.C. State surpassing Saturday’s total with 6:05 left in the first half — which drew sarcastic cheers from many of UNC’s home fans. Otherwise, N.C. State trailed big most of the night.

“We were letting them get out in transition a little more than we wanted,” Beverly said. “They out-rebounded us pretty bad. That’s something we’ve got to fix. But like I said, it’s not the end of the world. We can bounce back from it.”

“We kind of go in waves,” Johnson said. “Some guys have big nights, and then next guy has a big night the next game … and that’s pretty special to our team and bodes well going forward.”

It was UNC’s best point total in the rivalry’s 236-game history.