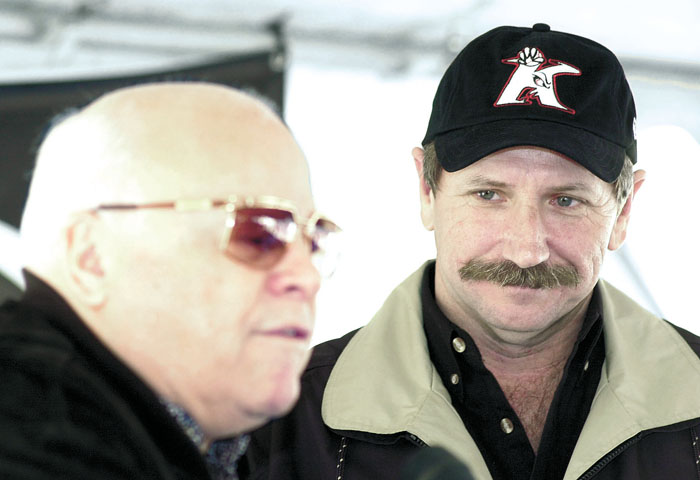 KANNAPOLIS — Fans can help rename the Kannapolis Intimidators, but they only have week to do it.

As the Kannapolis Class A baseball franchise moves toward a new era of baseball at the city’s new sports and entertainment venue, the team has invited the community to help rename the franchise.

On Wednesday, the team launched its “Branded New By You” campaign and is asking community members to suggest names to help define the team’s new identity.

Fans can submit their nominations for the team’s new name, along with an explanation of how and why it embodies Kannapolis professional baseball, by going to www.kannapolisballpark.com.

The team will accept submissions from now through Feb. 13th — next Wednesday.  Suggested names and feedback will be considered by the team as they work with award-winning brand identity firm Studio Simon to select a new name.

In addition to a new name, the rebrand will include a new logo and mascot. The new identity will debut after the 2019 season ends. The familiar Intimidators’ logo, a growling capital letter “K,” ready to “throw” a baseball, will be used for the last time this season.

For 25 years, Kannapolis baseball fans have cheered on their hometown team as the Phillies, Boll Weevils and Intimidators. Kannapolis baseball looks to enter a new era with a new name and a new ballpark in a new downtown Kannapolis. The new Kannapolis Sports and Entertainment Venue is scheduled to open in April of 2020.

The team will carry the city’s name in its title when it moves into the SEV.

“We are excited to partner with the Kannapolis community in revitalizing the downtown anchored by the new Sports and Entertainment Venue,” said new team owner Andy Sandler. “Giving fans an even better game experience with a new team name, fresh logo and engaging mascot is a very important part of what is ahead for Kannapolis baseball and the city. We look forward to community participation in this exciting rebrand.”

The minor league team came to Kannapolis in the 1990s, as an affiliate of the Philadelphia Phillies. The team was known as the Piedmont Phillies and then the Piedmont Boll Weevils, before a new ownership group came along in November 2000 with another name change.

That group included Kannapolis native and NASCAR great Dale Earnhardt and Charlotte Motor Speedway owner Bruton Smith. One of several nicknames that Earnhardt had on the track was “the intimidator.” Unfortunately, two months later, Earnhardt was killed in a crash in the 2001 Daytona 500. He never saw the Kannapolis Intimidators play a game.

The Intimidators name and logo have had a popular run and now the franchise is an affiliate of the Chicago White Sox. Vince Marcucci, assistant general manager, said the office received a lot of feedback on Wednesday, following the announcement.

“Yes, today (Wednesday) has been up and down, but you take everything in stride,” said Marcucci. “We had some phone calls, but not a lot of people have called us with negative comments — it’s been curiosity more than anything else.

“We really don’t have a new name yet,” continued Marcucci, who arrived in Kannapolis last September, after previous baseball positions in Trenton (N.J.) and Wilmington (Del.). “We really do want to gauge the interest of the public on this and we’ll see where it takes us. We hope to land on something great.”

Marcucci said that a name change had been talked about for several years, prior to his arrival, and it just makes sense to make the change in time for the new ballpark next year.

Marcucci related that he grew up going to Pocono races in Pennsylvania with his father, so he doesn’t want to see any history here be forgotten.

“There’s nothing to say that the new name might not be related to speed or racing-related or Dale Earnhardt-related, but we just don’t own the rights to “Intimidators,” he added. “We do want to continue to pay homage to that part of our history and I know that we’ll have aspects of Dale and our history within our walls, and considering we’ll be within walking distance of his park, I think that’s going to be a big part of what we look to do as we create the atmosphere of the new stadium.”

Marcucci explained the reason that fans have just one week for their team name suggestions.

“We have to stay within minor league baseball’s regulations for when everything has to be submitted for 2020,” said Marcucci. “We can’t actually announce the name until after the season, but we’ll have a few months to put things together and make a well-informed decision. We’ll have the name before the end of this season, but the staff will be sworn to secrecy.”

Season tickets for the 2019 season, including Founders Club memberships ensuring priority season seat selection at the team’s new home in 2020, are on sale now at IntimidatorsBaseball.com.

Opening Day for the team’s final season at the Intimidators Stadium supported by Atrium Health is scheduled for April 4 at 7 p.m., against the Rome Braves.

Note: Marcucci said that he joined the staff last fall at the recommendation of former Kannapolis GM Brian Radle, who had he worked with before. “I also wanted to be here because of the City of Kannapolis’ vision and the new ballpark and now, obviously, the rebrand — those are the things that attracted me to this position.”