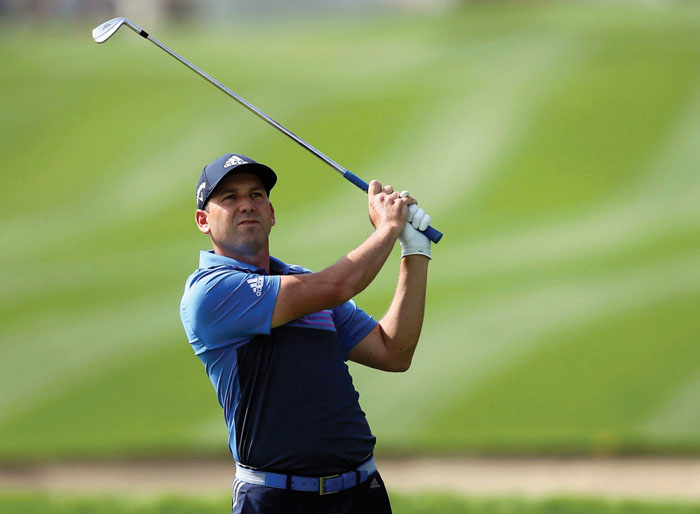 FILE - In this Saturday, Jan. 26, 2019 file photo, Sergio Garcia of Spain plays a shot on the 14th hole during round three of the Dubai Desert Classic golf tournament in Dubai, United Arab Emirates. Golf barely got out of January when it was hit with what must feel like a two-shot penalty. Odds are the negative attention on the new set of modern rules will have subsided before those four glorious days in April during the Masters unless, of course, the next man in a green jacket makes his final putt with the flagstick in the cup. (AP Photo/Kamran Jebreili, File)

PEBBLE BEACH, Calif. (AP) — Golf barely made it out of January when it was hit with what must feel like a two-shot penalty.

Odds are the negative attention on the new set of modern rules will have subsided before those four glorious days in April during the Masters — unless, of course, the next man in a green jacket makes his final putt with the flagstick in the cup.

As for Sergio Garcia?

More bad luck. His latest and most serious tantrum — damaging greens out of frustration at the Saudi International — comes in a year when the PGA Championship is held at Bethpage Black, where ruthless galleries can make even the fans at the Phoenix Open blush.

Any discussion, confusion and consternation over the new rules — particularly caddies standing behind their players — will pass soon enough. Expect some clarification as early as Wednesday on when and where a caddie can stand, no matter the part of the golf course.

Garcia won’t get off so easily.

The Spaniard took out his anger on a bunker during the second round in Saudi Arabia. That’s nothing new for Garcia, but video of it got even more attention because it was all anyone had to show in lieu of the real crime. The next morning, without any camera crews following his group, Garcia went after the greens. That led the European Tour to disqualify him for “serious misconduct” covered in Rule 1.2.

According to the digital newsletter “Morning Read,” players behind Garcia noticed “clearly intentional” damage on at least two greens that would affect play for the rest of the groups. Javier Erviti is the caddie for Renato Paratore, who was playing with Garcia, and he watched it all unfold. He told the newsletter, “We are used to the passion because we are Latin, but I had the feeling that his anger level was too out of hand.”

Garcia apologized in a European Tour statement announcing his disqualification. He later told Juan Luis Guillen, a Spanish reporter working for Morning Read, “Sometimes you lose your head and later you realize what you have done.”

European Tour chief Keith Pelley did not sound as though Garcia would face more punishment when he told The Scotsman: “The incident is over. We have dealt with it. Sergio has apologized and we move on.”

Suspending him seems appropriate. Then again, Garcia figures to be punished even more by playing, for he will be reminded of his actions the rest of the year, maybe the rest of his career, depending on the gallery.

In some corners, an equal volume of outrage was reserved for the first big flap over the new rules.

Li Haotong of China was docked two shots in Dubai when his caddie was walking away as Li was stepping into his final putt on the last hole. It didn’t look like the caddie was lining him up, and the penalty appeared harsh because it took him from a tie for third to a tie for 12th.

Golf can be cruel, and Rickie Fowler could attest to that watching his ball roll into the water in Phoenix.

In Li’s case, the rule was applied according to the book.

Five days later at the Phoenix Open, Denny McCarthy was penalized two shots when his caddie was standing behind him for a wedge over water to the green as McCarthy was making casual swings. The caddie moved away. McCarthy backed off, lined himself up and hit the shot.

By the strict wording of the rule, he was penalized.

The difference in the two cases is that a player can avoid penalty if he restarts his pre-shot routine on the putting green (Li). That doesn’t apply to other areas of the course (McCarthy). Even under the old rules, the putting green was treated differently.

The problem is that more videos surfaced of similar cases that week in Phoenix, and officials had to take a closer look. They consulted with the USGA and R&A and decided to rescind the penalty until they figure out how to administer the rule evenly.

Even when trying to simplify the rules, it can get complicated. And golf — especially its rules — is an easy target for criticism.

So is the USGA, which became the target on social media of PGA Tour players looking to assess blame. Yes, the USGA and R&A set the rules for golf worldwide. In this case, however, top rules experts from the PGA Tour, European Tour, LPGA Tour and others had a seat at the table in the biggest overhaul of rules in golf history.

It is not a “stupid rule.” That was a popular phrase after the McCarthy ruling. Remember, this new rule was a product of years of criticism that caddies were lining up their players (mostly on the LPGA Tour). The problem was not the rule, but writing it to make sense.

No one should have expected them to get everything right after such a massive project. The key is to fix mistakes when they arise. The players can do their part, too, and it’s really simple.

Have their caddie stand somewhere else.