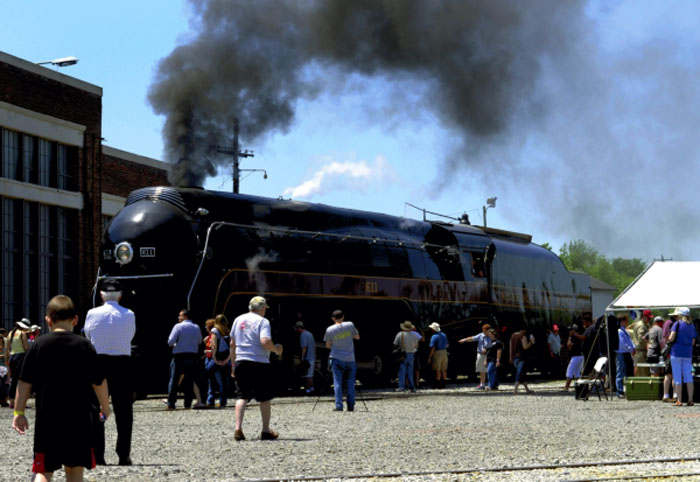 A Class J 611 locomotive sits idle while guests at the N.C. Transportation Museum take photos and get an up-close look at the steam engine. Salisbury Post file photo

SPENCER — In what’s become a trend in recent years, the N.C. Transportation Museum in 2018 set a record for total visitors.

Executive Director Kelly Alexander said the increase in visitors can be attributed, in part, to the success of the annual Polar Express, which marked its fourth year in 2018. The reopening of the museum’s Back Shop, an immense building once used to overhaul steam locomotives, and bringing new exhibits to the museum also have helped, she said.

“It has taken a lot of hard work by our staff and volunteers to get to this point,” Alexander said.

Day-to-day visitors, those not coming for a special event, also are part of the visitor total, Alexander said.

Visitors are from “all over,” including other states. Southwest Virginia in particular is the home for a number of the museum’s out-of-state visitors, she said.

“We want to be an economic driver to our community,” she said.

The increased number of visitors, in turn, helps with the museum’s budget, she said. A relatively small portion of the budget comes from state appropriations and the rest is earned income, including ticket sales, she said. Money appropriated to the museum in the 2016-17 fiscal year was $440,000, for example, and earned income — from both the museum and its foundation — was $4.5 million.

To continue the trend, Alexander said the museum is working to brainstorm new offerings and increase the quality of existing events.

She said the temporary relocation of Pops at the Post, a free community concert by the Salisbury Symphony, is an example of partnerships between local organizations that helps draw visitors to the museum.

“The North Carolina Transportation Museum and other sites in Rowan County are continuously adding new product and new options for visitors at their locations,” Meacham said. “Their efforts to reinvest pays dividends by giving new and repeat visitors a wider selection of experiences and more reasons to visit. The sites are accomplishing this through a wide array of events, new activities and new features.”

Meacham said efforts to secure further capital funding for the Transportation Museum will be a critical component for its continued success and growth in visitation, helping the local economy more.

He said the most popular site for visitors to Rowan County remains Dan Nicholas Park, which hosted more than 500,000 visitors in 2018 and provided youth activities to more than 23,000.

Lee Street Theatre also reported record attendance with the Scrooge Trolley Tour — 1,800 tickets sold — and 7,500 visitors to shows and other programs in 2018.

In an email, Patterson Farm said business growth led to a decision to increase the number of events in 2019, including summer tours.