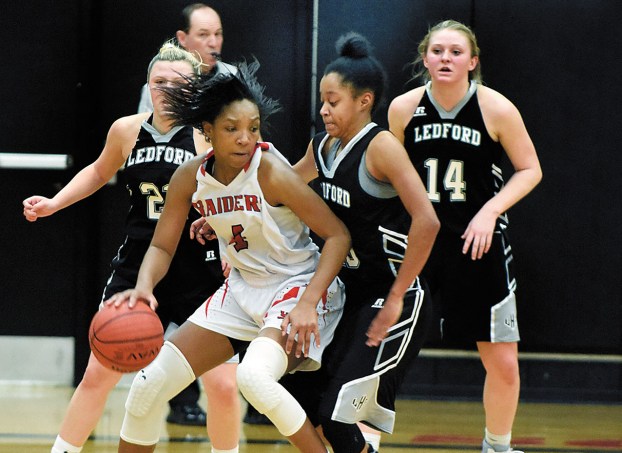 LANDIS —  It’s possible that it was the first time in modern hoops history that a pair of girls with 2,000 points in the bank have squared off in a Rowan County gym.

Rowan has had only four 2,000-point girls, the fourth, of course, being current South Rowan senior Janiya Downs. Salisbury’s Shayla Fields and North Rowan’s Sophilia Hipps, two of those four 2,000-point scorers, were contemporaries, but Fields had graduated and was a freshman at N.C. State by the time Hipps hit 2,000 as a senior for the Cavaliers.

If anything, their historic matchup was under-hyped. Thorne scored a smooth 46 — all in the flow of the game — while Downs had 43. Ledford won an important matchup in the Central Carolina Conference standings, 68-53.

“Both of those girls are great players,” South coach Stacey Ellis said. “But the best thing about them is they see their teammates. They’re not just out there trying to score points, they’re playing the game. Lyrik’s teammates just did a better job of finishing  tonight than Janiya’s did.”

As spectacular as they were, Thorne and Downs virtually canceled each other out in the scoring column.

But Thorne’s teammates came through, especially senior McCall Denny, a 5-foot-10 Appalachian volleyball recruit who was injured when South beat Ledford early in the season. Denny had double-digit rebounds, six points and several nice assists, and was the third-best player on the floor. Even when South got the ball out of Thorne’s hands, Denny usually did something positive with it.

“Getting Denny back obviously changed our rebounding — we get a lot more stick-backs now — but it also changed our confidence level,” Thorne said. “She’s like having a coach on the floor with us. She helps  in a lot of ways.”

South (11-9, 10-4) didn’t start well. Thorne, who is hard to stay in front of and impossible to press, was at the foul line constantly in the opening minutes. Her free-throw accuracy propelled Ledford to a 16-9 lead.

“It’s like we just weren’t mentally ready at the start,” Downs said. “This was a very big game in the conference, but we didn’t come out like it was a big game. We want to play fast, but it was a very slow first half.”

A flu-depleted South team lost 61-60 at West Davidson on Friday, despite a county-record 53 points by Downs. South had Bethany Rymer and Carlie Moore healthy enough to contribute on Monday, but Rymer, who scored two points, obviously wasn’t back to 100 percent.

“That West Davidson loss was a tough one, and I think it had some carry-over to tonight,” Ellis said. “Mentally, we still weren’t over it.”

Downs scored 15 in the first half, but Thorne countered with 22. Ledford also got some nice buckets from Ashlyn Roark and Ashley Limbacher off Thorne’s penetration to push to a 33-22 halftime lead.

“Our biggest goal coming in was to keep Downs off the offensive board — that’s where she killed us when they beat us — and we did a pretty good job of that,” Ledford coach Chris Doby said. “Our preparation, our whole focus was holding South to one shot. If that one shot came from Downs, we had to try to make it a tough shot outside the paint. If that first shot came from someone else, we had to try to make sure that Downs didn’t get the second shot.”

Downs missed seven free throws, but it was hard to argue with anything else she did or didn’t do.

South got 3-pointers from Madison McGuire in the second and third quarters. Rymer tossed in a shot in the first quarter, and Jahleah Butler battled for a first-quarter put-back. Other than that, South’s offense was Downs. She scored 28 of South’s 31 in the second half, mostly on driving, weaving, spinning moves to the goal. She was the only Raider to score in the fourth quarter.

Thorne was dynamite throughout, making only one 3-pointer, but scoring in transition frequently and using her speed to get to the rim for hard-nosed finishes against South’s halfcourt defense.

“We were well aware of what she can do, but she’s very under control and very good at getting the ball into the gaps in a zone and either scoring or dishing,” Ellis said. “She made some tough shots through contact with our bigs right up next to her. She’s an excellent player, and we didn’t do a good enough job of sliding to get in front of her.”

South cut its deficit to 41-33 when Downs scored on a break with 2:46 left in the third quarter, but Thorne responded with a driving hoop and a steal that led to two free throws, and Ledford was back in control.

South just didn’t have enough left for a push at the end. Thorne got to sit down late with the game well in hand.

“Janiya is a really good player,” Thorne said. “We just tried to make her shoot from outside, tried to keep her from getting to the basket. We did the things tonight that we needed to do to win.”

Downs made two 3-pointers, blocked four shots, pulled down 10 rebounds and assisted on three of the four South field goals that she didn’t score.

“Everyone knows who we are now, everyone has game film, and everyone knows what we can do,” Ellis said. “So we’ve got to defend better and execute better than we did tonight. But I don’t want to take anything away from Ledford. That’s a good team and they played very well.”

NOTES: Ledford has a huge home game tonight against CCC frontrunner Salisbury, while South is home against Thomasville. … Hipps, who graduated from North in 2006 before going on to a fine career at South Carolina State, is second all-time in Rowan girls scoring with 2,264 points. Downs is closing in on her quickly with 2,188. Downs has averaged a ridiculous 44.5 points per game in her last four contests. She’s scored 656 points this season and is averaging 32.8 points per game, a county-record pace.

Click here to view more photos from the game.