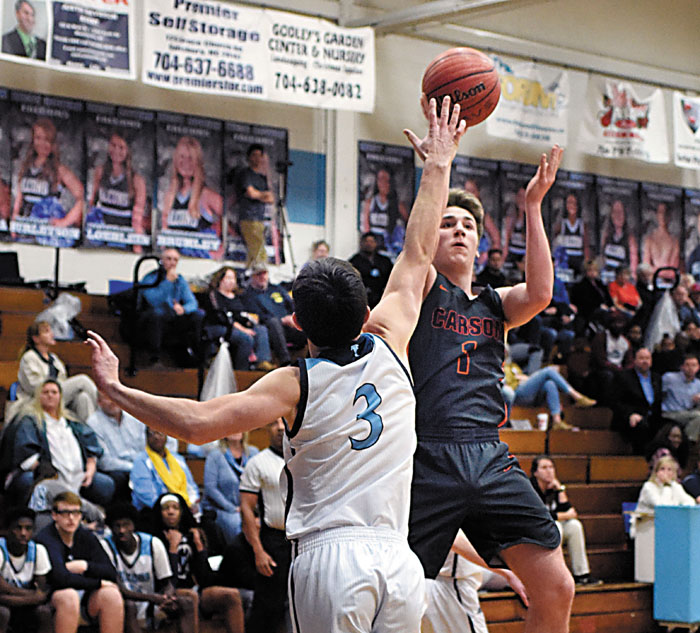 Another slow start. Another deficit. Another comeback.

“We stood around a lot, East made some shots, and their crowd was really loud and got into it,” Carson coach Brian Perry said. “But we’ve had some starts like that. The key is just to keep defending, to keep grinding, and eventually some of those shots will fall.”

The shots started falling for the Cougars (11-9, 6-1) in the second quarter. AJ Mauldin made a couple of 3-pointers, Mark Spry made a 3-pointer.  Javon Smith hit a 3-pointer and converted a three-point play.

“We were able to push the ball more,” Perry said. “We got our bodies moving a little bit, we finished some drives, and we made some shots.”

Carson, which has recovered nicely from a 3-8 start to the season, finally inched in front in the third quarter.

Cole Perry’s three-point play broke a 45-all tie with four minutes left to play, and the Cougars didn’t trail again.

Perry and Smith made clutch free throws at the end, as the Cougars held on.

Coach Perry also pointed at Spry as a big factor. He did the defensive work against Gavin Sprinkle, who’s had some huge scoring nights.

“This game was a whole lot like the ones  at West Rowan and at North Iredell,” Coach Perry said. “In all three of them, we were down, but we just kept fighting. That’s three really good road wins in the league, and I’m proud of how this team has fought through some very tough road games.”