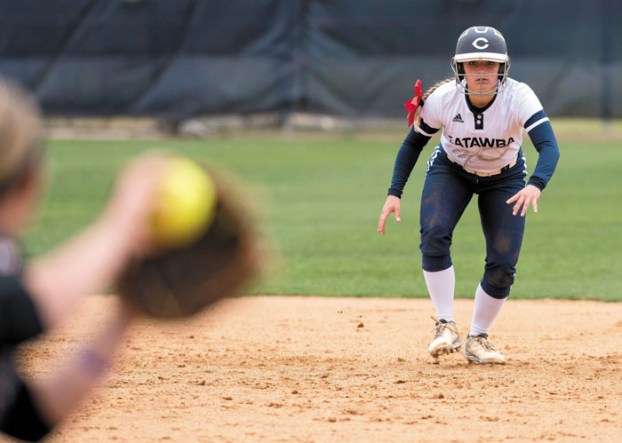 Pinch runner Leah Huggins reads the first baseman as she takes a short lead off second base during a game against Brevard College on March 19, 2016.

The Indians were picked ninth in the 11-team league, with a vote total of 32 that was closer to 11th-place Mars Hill than to eighth-place Lincoln Memorial.

The preseason All-SAC first team didn’t include any Catawba Indians. Neither did the second team.

People close to the program believe Catawba will do a lot better than ninth place this season, but it’s not hard to see why SAC coaches picked them there.

Catawba wasn’t awesome last year, 20-26 overall and tied for seventh in the SAC with an 8-12 mark.

Catawba lost Monica Taylor, the starting catcher, as well as Delane Smith. Based on OPS, Smith was the team’s strongest offensive player in 2018.

Catawba also has a new head coach in Mandy Harris-Morgan,  the first person to guide Catawba fast-pitch softball other than Nan Whitley, the Hall of Famer for whom Catawba’s softball field is named.

If you’re an optimist, even at 8-12, Catawba was only four games out of second place last spring in a league that was extremely balanced with the exception of dominant top dog Lenoir-Rhyne. L-R lost only one SAC game in 2018. That was the 8-1 pounding the Bears took from Catawba last March 22.

Harris-Morgan, who was hired in July, hasn’t lost any sleep over that unflattering preseason poll.

“It’s like I told the girls, in the last 20 years I haven’t seen a preseason poll yet that got everything right,” Harris-Morgan said. “It’s up to us to prove people wrong, and I know the girls are highly motivated to prove them wrong. (Right fielder) Leah Huggins was pretty vocal about us not having anyone on the All-SAC teams.  If we win the SAC tournament and none of our players are all-conference, well, we’ll just have to live with that. But this a team game, and usually things work out. If you win as a team, individual accolades follow.”

Catawba has 23 on the roster, including 18 returners.

Only three are seniors  — outfielders Huggins and Beth Ann “BA” Martin and Sierrah McCarthy, who opens the season as the starting first baseman.

“Those three seniors are really important to us as leaders because they’ve seen all sides of it,” Harris-Morgan said. “As freshmen, they were on a team that won the conference tournament and played in the regional, so they know what it takes to do that. Then the last two years they were part of teams that didn’t do as well, so they’ve learned from that too.”

The most critical element for any softball team is the person in the circle. Catawba doesn’t have a superstar there, but the Indians do have numbers and experience. A committee of five hurlers could see action. Madison Hunter, Brooke Walser and Preston Ellenberg performed very well last season while sharing the workload.

Hunter has recovered from an appendectomy. She had the most wins last season (8-6). She was the toughest to hit and the most likely to get a strikeout, but she also had the most walks.

“They’re all a little different, so we can show opponents some different looks,” Harris-Morgan said. “We’ve got good options.”

The catcher replacing Taylor is going to be Maddie Bell, who started seven games last season. Gracie Gibson will factor in behind the plate when she recovers from an injury. Nicole Hunter and Bailey Benton are the other catchers on the roster.

The infield will be anchored by shortstop Jordan Dean, a sophomore who brings a big arm and good range to the position and also provides a long-ball threat at the plate. Dean had five homers and 24 RBIs last season.

McCarthy has played mostly third base, but is making a move to first base this season. He strength is defense.

“She’ll save us throwing errors,” Harris-Morgan said. “She’s been picking everything. She has a very good glove.”

Catawba opened the season Saturday, with Carlee Brawley at second base and Grace Holland at third base. Taylor Martin is still recovering from foot surgery but isn’t far away. She’ll probably be the second baseman most of the time once she’s healthy. Brawley also can play third, so there should be plenty of work for all three. Brawley was a .301 hitter last season, was tough to strike out and scored 24 runs.

Martin, a junior, was All-SAC second team as a freshman, but was never healthy as a sophomore. Despite a low batting average (,212), she was good at situational hitting last season. Catawba had 10 sac flies — Martin had half of them. She also had six sac bunts, second on the team.

Huggins will be counted on as a run-producer in the middle of the lineup and will be the regular right fielder. She batted .331 with 16 RBIs.

Sydney Goertzen will be the starter in center field. She didn’t play a lot last year, but emerged in the preseason. She’ll probably lead off and gives the Indians speed on the bases and on defense.

Harris-Morgan said left field “is up for grabs.”

Kaylee Cook is a likely starter if she’s over some shoulder issues. She hit .333 with 11 RBIs last season and was Honorable Mention All-SAC. So was Allie Baker, another outfield candidate. Beth Ann Martin could get starts in left field, and she’ll help the team as a pinch-runner and defensive replacement. Katelyn Jones is another potential outfielder.

Ellenberg is a strong hitter and could be used as a DP when she’s not in the circle, probably swinging for the pitcher or McCarthy.

Freshman first baseman Brooke Lowery figures to contribute mostly with her bat this season. She’s a potential DP and pinch-hitter.

Other newcomers on the roster are freshman infielder Kayla Pedersen and freshman outfielder A’Yonna Waddell.

Harris-Morgan was greeted in the fall by two hurricanes that submerged Whitley Field, but things have gotten calmer.

“It’s been wet this winter, but nothing like the fall,” Harris-Morgan said. “We’ve been able to practice OK and the girls have done everything I’ve asked them to do.”

NOTES: Shane Prescott returns as assistant coach. … A fundraising project to provide lights for Whitley Field was an overwhelming success. Those lights are scheduled to be installed by mid-April. … Catawba had a team GPA of 3.53 for the first semester. … Catawba got off to a super start on Saturday by winning a doubleheader at Augusta. Ellenberg and Walser got wins, while Hunter earned a save. Dean smacked Catawba’s first homer of the season. … Catawba plays its first home game on Wednesday. A doubleheader with Limestone starts at 1 p.m. … Catawba will be the host team for the SAC Championships on April 26-27. … Lenoir-Rhyne is favored to repeat as SAC champion. … Local players on the roster are Taylor Martin (West Rowan), Lowery and Beth Ann Martin (South Rowan), Hunter (Gray Stone) and Cook and Baker (A.L. Brown).

By Mike London mike.london@salisburypost.com LANDIS —  It’s possible that it was the first time in modern hoops history that a... read more