Rockwell EMS station to be named for Frank Thomason 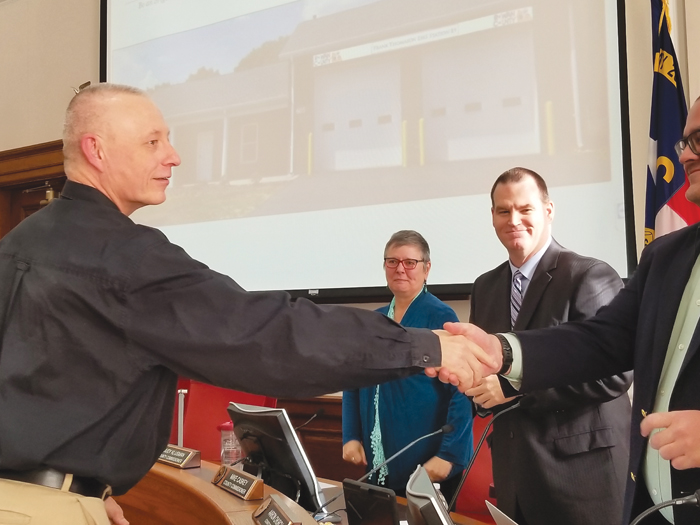 Former Emergency Services Chief Frank Thomason, left, shakes hands with Rowan County commissioners and staff after it was announced a Rockwell EMS station would be named for him. Josh Bergeron/Salisbury Post

SALISBURY — Longtime Emergency Services Chief Frank Thomason retired more than a year ago, but he hasn’t received his last honor just yet.

The Rowan County commissioners on Monday announced plans to name a Rockwell EMS station opened last year for Thomason, with a formal ceremony to be held at a date to be determined. The facility’s name will be Frank Thomason EMS Station No. 89.

Thomason, who attended Monday’s commissioners meeting, said he was surprised by and appreciative of the honor. Thomason had been lured to the meeting not knowing the commissioners were honoring him.

“While I certainly do appreciate it and I’m more than honored by it, I’ve said many times that I consider myself, probably, the luckiest person on the planet to have been able … to do not only just the job but to have the opportunity to do it in your own backyard, where you were born and raised,” Thomason said.

Many times, Thomason said, people who advance to a position like chief of emergency services must move to another state or across the country for the job.

He became chief of Emergency Services in 2004 and held the position until his retirement at the end of 2017. His successor is Chris Soliz, who started as emergency services chief in February 2018.

In their comments Monday, commissioners offered unanimous praise for Thomason.

Commissioner Mike Caskey said Thomason was a great leader and supervisor and someone to look up to in the emergency services community.

“Fire departments are independent contractors for (county government) and have a lot of independent personalities along with that,” Greene said. “Anybody who coordinates all that they do is a special person, and we hope that you appreciate that you were instrumental in getting (the Rockwell station) built.”

Announcing the honor Monday, Soliz said he doesn’t like to keep secrets but that the Rockwell station’s dedication was one worth keeping. Soliz said the honor is meaningful to those who work in emergency services.

The Rockwell EMS station is at the intersection of Trexler Avenue and East Main Street. It was built in response to a need for improved response times.