‘I have been given another chance at living’: Women give powerful testimonies for Capstone Recovery Center benefit 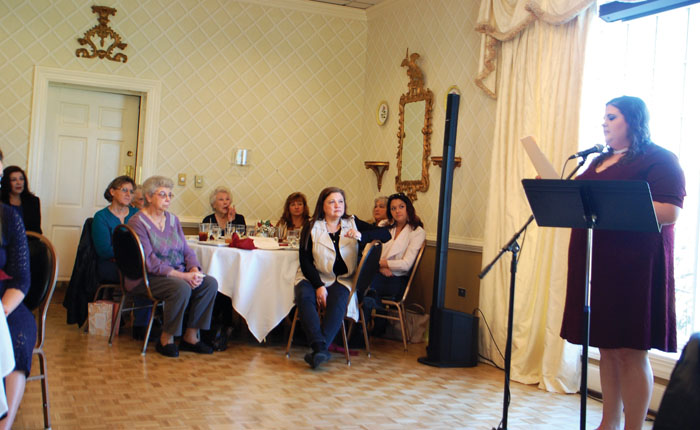 SALISBURY — Sara Fields grew up in Kannapolis the daughter of a funeral director and school teacher. She had a Christian upbringing and plenty of opportunities to succeed.

“But I always felt something was missing,” Fields said Saturday afternoon at the annual fundraiser for Capstone Recovery Center for Women.

Over the next several minutes, dabbing away tears as she proceeded, Fields recounted some horrific years.

They included escaping her family’s expectations and heading for college in Florida, becoming a drug addict, breaking into her parents’ home and going to jail, the loss of her parents and daughter in a plane crash, squandering her inheritance, giving birth to a still-born baby, going through a divorce, losing custody of her only other child and becoming an IV-user of heroin.

Her downward spiral made her question God, led to moving in with an abusive man who also shot up drugs, and living for a while in a vehicle.

Fields, now 35, says she was brought back to life several times from overdoses. And it was only when she landed in jail again on drug charges and sick from withdrawal that she found hope with Miriam Ramirez, executive director of Capstone Recovery Center in Salisbury.

“Miriam was Jesus in the flesh that day,” Fields said.

On Aug. 29, with only the clothes on her back, Fields became a resident at Capstone, and she was among several women giving powerful testimonies Saturday during the Christian-based recovery center’s fundraiser.

Fields said that, in effect, she had to kill the old Sara to find new life, and “I have been given another chance at living.”

“I have absolutely surrendered my life to Jesus Christ,” Fields said, adding she has been taking her recovery one day at a time. “Without the Lord and Capstone, there’s no telling where I would be.”

Other current residents and Capstone graduates shared similar stories of how they lost their way, turned to drinking and drugs, fell into abusive relationships with men and even resorted to prostitution to pay for their habits.

They credited Capstone, now in its seventh year of providing both residential and nonresidential programs, for reintroducing them to God, building a relationship with him and recognizing he is always there, loving them.

“I have the desire to seek him daily, to share his love,” said Kathy Thompson, whose drug use went from marijuana to crack cocaine and gave her the mindset that “I was going to hurt you before you hurt me.”

Today, she says she has escaped a life of bondage, in which sin held her captive. She described her relationship with God as “bigger than I can imagine.”

Capstone’s annual fundraiser Saturday afternoon at the Country Club of Salisbury included a sizable silent auction of items and encouragement for people to fill out pledge cards at their dining tables.

Mixed in with the women’s testimonies were some songs by graduates and the residents themselves.

The support is needed because Capstone provides its residential facilities — housing, life skills training, individual and group counseling, computer training and employment help — free of charge and for months at a time.

Ramirez says Capstone has room for 12 residents, but the number is currently seven. The Rev. Oscar D. Ramirez, her husband, is director of counseling.

Shirley Luckadoo, a former vice president of instruction at Rowan-Cabarrus Community College, is Capstone’s curriculum director and chairwoman of the board.

Luckadoo told Saturday’s crowd “we are at war” with opioid addiction and other drugs in Rowan County and that supporters of Capstone have chosen to be warriors against this crisis.

“Your hands, your feet, your money support this ministry,” Luckadoo said. “Lives are being transformed. I have seen the transformation of lives for the past seven years and some of these people are sitting with us today.”

A Capstone graduate from July 2016, Hayley Criscoe said she has been sober four years. Attending Saturday’s fundraiser with her were her parents and husband.

Crisco spoke of her struggles — how “toxic relationships” and smoking pot and drinking eventually led to pills, shooting up heroin and prostitution to feed her addiction and that of her boyfriend.

After ending up in jail, Capstone saved her, Criscoe said. She spent nine months as a resident.

“God had other plans for me, and his ways are so much better than mine,” she said.

Another graduate, Wendy DeLong, sang two songs for the audience, accompanied by Devin Smith. DeLong graduated from Capstone in September 2015. Capstone was the place, she said, where God gave her freedom from her fears and addictions.

“He is limitless in what he can bring about in your life,” DeLong said.

Ashley Creek, who has been a Capstone resident since June, said she has learned the difference between getting sober and living sober. The counseling she has received at Capstone has been effective, she said.

Creek learned God loves her even with her poor choices. “All I used to feel was pure rage,” Creek said. “Now there’s joy where the rage lived.

“There’s hope, and his name is Jesus Christ. I’m one of God’s miracles.”