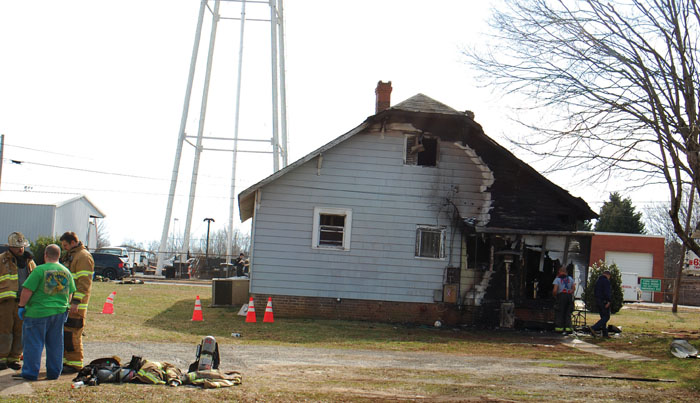 A fire significantly damaged a back portion of a house at 617 Salisbury St., China Grove, Sunday close to noon-time. No injuries were reported. A mother and her four children live in the dwelling. They reportedly were not at home when it happened. Mark Wineka/Salisbury Post

CHINA GROVE — Fire destroyed a back portion of a home at 617 Salisbury St. Sunday, possibly displacing a mother and her four children.

The fire also spread into the attic before being controlled by firefighters.

“The back of the house has heavy damage,” said Mike Zimmerman, chief of the China Grove and Bostian Heights departments.

Meanwhile, many of the same firefighters responded to a structure fire — a barn holding some classic and hot rod cars — around 2:15 p.m. at 807 Yost Road, Salisbury. (Yost Road is off Webb Road). It initially was called in as a camper on fire, but the flames soon spread to the structure.

According to emergency traffic, firefighters did their best to move cars out of danger.

The house in China Grove sits at the corner of Salisbury and Vance streets and is across from the China Grove water tower.

Zimmerman said the China Grove occupants had gone to church, then a local restaurant when they were notified of the fire, for which Zimmerman received his first notification at 12:09 p.m.

He said firefighters responding met heavy fire and made an internal attack. The fire is believed to have started in the back of the house around a washer and dryer. Zimmerman said firefighters got a quick knockdown.

Zimmerman said Reid Simmons owns the house, and his daughter-in-law Mackenzie Simmons and her children lived there. The Red Cross would be notified if the family needs some temporary housing assistance, Zimmerman said.

When it was reported in as a working fire, Salisbury and Kannapolis departments also were dispatched.

Firefighters from multiple departments were fighting fired and ferrying water to the Yost Road barn site. Media were not allowed past the Webb Road intersection while the fire was in progress.

Scouting for Food: Packs and troops comb county to…