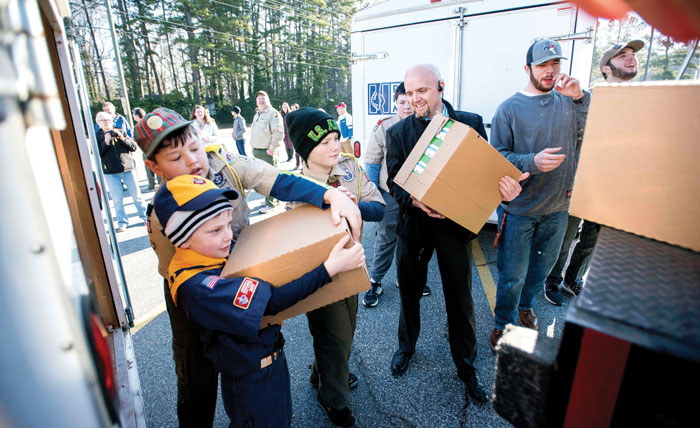 SALISBURY — Several Troop 448 scouts were standing near the back of Scoutmaster Emeritus Jack Kepley’s pickup, taking a break and debating among themselves, believe it or not, about whom invented the light bulb.

They were in the midst Saturday morning of combing the Chestnut Hill, Thomas Street, Wiley Avenue and Fulton Street areas, picking up bags of food residents had left out for their Scouting for Food collection.

Scoutmasters Al Wilson and Wayne Sasser soon walked up and joined the group at the intersection of South Jackson and McCubbins streets. And it was Sasser who lit a fire under the Scouts, reminding them of the mission at hand.

“I’d like to point out that at our current pace, we’ll never finish,” he said.

So back to work they went. The previous Saturday, members of Troop 448 had distributed 400 Scouting for Food bags in their neighborhood around Coburn Methodist Church.

Saturday morning, they returned to the same area to pick up any bags of non-perishable food residents had left for them. They filled several pickups, and that food was later delivered to Rowan Helping Ministries, to help replenish its pantry.

It was part of a district-wide effort these past two weeks that involved approximately 40 different Cub Scout and Boy Scout units, District Director Jeff Bays said.

The district has 1,400 Scouts, and Bays judged 700 to 800 were involved in Scouting for Food effort Saturday.

Most of the thousands of pounds of food collected went to restock pantries of the Salvation Army, Rowan Helping Ministries and the Main Street Mission in China Grove.

In addition, some church pantries also were helped out.

For the third year, the big bonus for the Scouts’ drive was a contribution of foodstuffs from Food Lion — this year, 21,000 pounds.

“We’re just so excited to supplement what the Scouts are doing with Scouting for Food,” Food Lion representative Angela Wheeler said.

It meshes perfectly, Wheeler noted, with the company’s ongoing Food Lion Feeds program across its 10-state footprint that benefits food banks and various other nonprofits.

Grubb said her organization was “so thankful” to Food Lion and the Scouts and that the food was desperately needed at her agency, especially for the month ahead.

“We really do anticipate February having a higher need,” she said. “It’s perfect timing.”

Salvation Army Capt. Karl Dahlin said he recently had to make a purchase from a food bank.

“It (the Salvation Army pantry) was looking pretty bare recently,” he said, thankful for the Scouts’ and Food Lion’s contribution.

Scouts also helped in the unloading of the Food Lion truck, dividing those goods into waiting trailers and trucks of the receiving agencies and also helping with the stocking duties.

Ann Barber, chairwoman of the Sapona District, was a key organizer of the local Scouting for Food effort, an initiative which actually dates back to an Eagle Scout project in the Midwest in 1985.

With the recent cold snap, Barber said, “we know the need has multiplied and increased.”

“And we’re teaching the boys here,” Barber added. “It’s a family affair (in some cases). We have whole families that go out and collect.”

Part of the education for Scouts was showing them the proper way to perform a service and how “you give it your best,” Barber said.

At Rowan Helping Ministries, for example, Scouts cleaned the pantry, weighed the food coming in, sorted it, shelved it, then cleaned the storage area again. It fits the Scout camping mantra of “Leave no trace.”

It’s also the idea, Barber said, of identifying a problem and being part of the solution. She was thrilled knowing that when Rowan Helping Ministries employees report to work Monday they’ll know their pantry is fully stocked, organized and ready to go.

As for who invented the light bulb, someone needs to tell one of the Troop 448 Scouts it was not Thomas Jefferson.