In ‘Together,’ Judy Goldman considers trauma and love 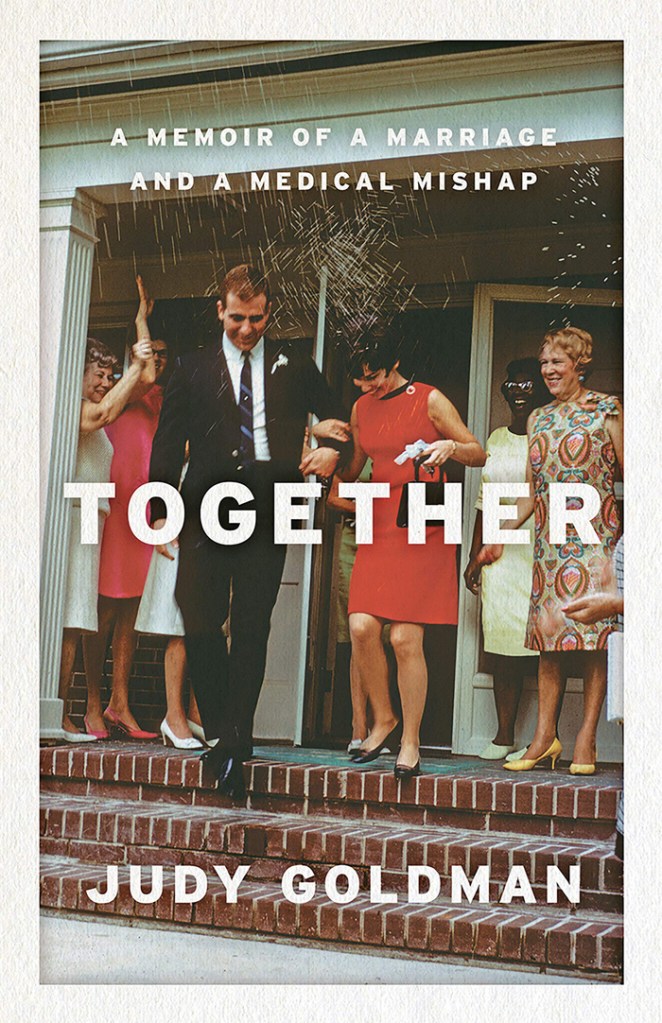 “Together: A Memoir of A Marriage and a Medical Mishap,” by Judy Goldman. Nan A. Talese/Doubleday. 272 pp.

Somehow, Judy Goldman wrapped the story of a medical mistake into a beautiful memoir about her marriage and how love can change you.

Her husband, Henry, an optometrist, has had back surgery but is still in pain. When he sees an ad for a physiatrist who gives steroid shots like an epidural, he wants to try it. Judy thinks it’s a lot better than another surgery.

And so, the first shot takes little time, but Henry’s right leg is numb for 8 hours. The physiatrist says that’s a sign the shot is working. Henry is to come back in three weeks. Meanwhile, the Goldman’s vacation in St. Martin — sun, sand, books and good food.

Shot No. 2, Judy finds herself a long time in the waiting room, and when she’s finally taken back to see Henry, things are not going well at all. Henry can’t feel anything from the waist down.

So the drama begins. But Judy takes us to another place and time, telling us how her parents met, how she and Henry met, “We literally saw each other three times and decided to get married.” Then she talks about her first teaching job, not a pleasant experience, in one of the “first high schools in Georgia to integrate.” She pulls up her roots and heads to New York, where she graduates from secretary to copy writer.

Then we’re back with Henry and Judy as they wait for an MRI. The tension is palpable as she waits for the test to end and decides to call their son, Mike.

And then she describes her first, blind date with Henry, where they talked from dusk to dawn. When they decide to marry just two dates later, she remembers how she felt: “We called it love. I felt familiar to him, he felt familiar to me: We were so much alike, there was a rush of recognition. a humming. Right away, we trusted each other. At the same time, a key part of our mutual attraction was that we were so opposite. He completed me. I completed him.”

And so Judy takes us on the journey, memories of the early months of her marriage to Henry, stark medical realities like the fact Henry can’t even pee since the shot. Going back and forth relieves the tension, helps us forget about how angry Judy, the wife and new medical watchdog is. Henry comes across as a strong, upbeat person, very sure of himself as the dominant one in the marriage – at least to start. The back and forth keeps the reader glued to the page, always wondering, “what happened next?”

But slow down. Savor the development of their marriage, the arc of changes that come with children, careers, culture, age. Listen to them assert themselves and support each other. Look at the easy way they have with each other. Marvel at their big fights and at the fact they never say the word “divorce,” no matter what.

Judy is saying, hey, we got this far, what’s a little paralysis along the way. At the same time, she’s furious, frightened and sure/unsure all the time. Should she be tough or quiet? Does she fight or listen? And look at Henry, not talking, not dominating, sitting or lying back, lost in his own thoughts, focused inwardly.

If this were fiction, it would be called a character study, but this is real, and the details show how real it is, the conversations with their son Mike and daughter Laurie, their time being happy with the boisterous grandchildren.

But current reality steps in again, as the baffled physiatrist tells the family they don’t really know what happened to Henry. Mostly, he is astonished that this has happened and tries to deflect blame. It’s all about him.

The memories keep coming, and more, as well, with Judy and Henry learning how to cope with what mobility he has, visits to rehab, more doctors, more frustration, more tests or therapy or therapy not done because someone didn’t write it down, or someone else didn’t read it.

When we get to the part of the couple living with this new reality, Judy spares no punches. We get plenty of the bad, and the moments of good. She’s still trying to sort out her anger and frustration. Henry is doggedly determined to keep moving, keep trying.

And this memoir becomes a testament to what people who love each other can accomplish. How they can face the world with heads up and fears sorted. Mostly. Henry doesn’t break down until much, much later.

Life doesn’t get easier, but they persevere.

Near the end of the book, Judy writes, “… I fell into the trap of seeing Henry’s caregivers as other. And thought it was us against them. My unlovely self on full display.

“Isn’t it the same in marriage? Henry knows an uglier Judy than anyone else in the world knows. He knows a more attractive Judy, as well. Just as I know both sides of him.

“Marriage. And trauma. They both have a way of introducing us to our most extreme selves.”

Finish the last few pages. Sit quietly for a while. Let the wisdom wash over you.