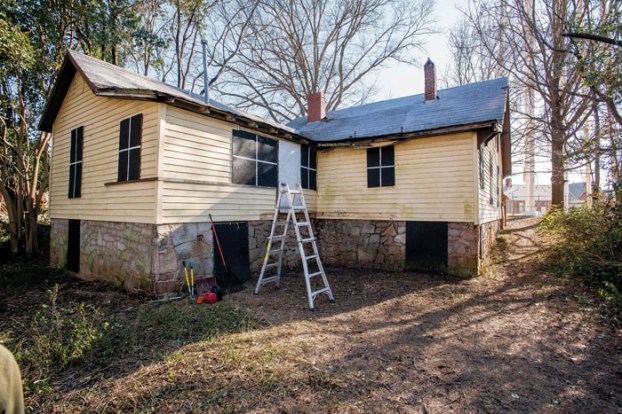 Neglected for years and in a state of disrepair, the Salisbury City Council approved the house’s demolition.

“These structures in their current condition possess significant health and safety risks to the general public and are negatively affecting the neighboring property values,” said Code Enforcement Coordinator Michael Cotilla about a package of homes, one of which was the Fulton Street house, approved for demolition.

Fortunately, that statement conflicts with the current state of affairs. The demolition has been postponed and the Historic Salisbury Foundation has begun work to save the house, with Steve Cobb telling Post reporter Liz Moomey in a story published Friday “this will be another successful rehabilitation.”

The structure of the home is still intact, he said.

That the house is in a dilapidated state does not preclude a rehabilitation from breathing new life into the home. Because, when the house is gone, it can’t be replaced, certainly not with something dating back to the early 1900s.

The easy argument is “tear it down.” Vagrants have found their way into the structure, reportedly leaving bottles of alcohol and needles in their wake.

Demolishing the house, however, tears at the fabric of the Fulton Heights Historic District (the house sits at the edge of the district) and the neighborhood within. It’s a poor choice when preservation is an option. On Fulton Street, the house is a sort-of border between the neighborhood and the commercial buildings on nearby South Main Street.

Whether it’s the West End or the West Square, neighborhoods are a small community that help make cities diverse places to live.

Saving or rehabilitating buildings instead of creating vacant lots keep a neighborhood’s character intact or improve it.

In another neighborhood on a lot with a house possessing unknown history, perhaps demolition occurs without hesitation — there’s no group to advocate for a delay.

But those situations are no better and tear at a loose thread of a neighborhood just the same.

The city of Salisbury, city government and the organizations within its borders, have placed a priority on preserving our history.

And, if we truly value our history, some effort must be made to preserve it, whether it’s a house or something less tangible. For that reason, preserving the Fulton Street house is the right decision and, when possible, the right call on other streets, too.

Quotes of the Week: ‘We have arrived’

“We’re putting the flag on the ship. We have arrived.” Randy Elium, president of the Carolina Antique Power Association, which... read more