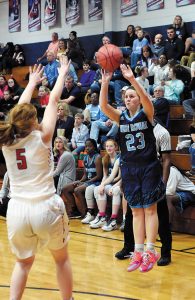 The Falcons, losers of their previous three North Piedmont Conference games, launched the second half of the league season Friday night with a had-to-have-it, 65-37 triumph at East Rowan.

“When you’ve lost three in a row,” Poole said, “you’ve got to get that next one. You can’t keep losing.”

The victory refueled West (15-4, 3-3) and sent the Mustangs (12-7, 1-5) tumbling to their third straight defeat. West opened the season with 10 consecutive wins and were 2-0 in league play on Jan. 11 before their three-game tailspin.

“It was mandatory that we got this win,” said junior Taylor Poole, the coach’s daughter and West’s primary shooting guard. “We can’t afford to lose another game. We got our chemistry back tonight.”

Poole’s contribution was key. She shot 6-for-10 from the field, sank a couple of 3-pointers and scored 12 of her 14 points in the decisive third quarter. Teammate Abigail Wilson led all scorers with 18 points and rebounders with 14. Junior Caroline Houpe and freshman Mary Spry topped East with 11 points apiece.

“West played really well in the second half — and we didn’t,” losing coach Kevin Holland said after East mustered only six field goals and 14 points in the third and fourth periods. “If there was a pivotal moment, it came in the third quarter when we had two defensive breakdowns and they hit two threes that were close together. For some reason, that really got to us.”

West trailed 23-22 at halftime, but opened the third quarter with a 16-2 scoring spurt. Included were long splashdowns by Mary Sobataka and Poole. When Wilson took a perfectly threaded pass from Sobataka and finished a runaway layup, the Falcons led, 38-25, midway through the stanza.

“I didn’t like the way our defense looked and how we weren’t attacking the basket in the first half,” said Coach Poole. “I think the third quarter cost us the last two ballgames. We’ve been coming out of halftime flat and haven’t made adjustments. But I guess we got it right tonight.”

West nourished its lead to 49-35 after three quarters and cracked the game open in the fourth. Layups by Whitley Arnott and Gabby Blabon helped make it 57-35 with 3:20 to play and reserve Brook Hoffner’s two free throws closed the scoring in the waning seconds. Spry had East’s only fourth-quarter bucket.

West hopes the victory signals a much-needed about face. “It’s definitely a start,” said Wilson. “Now we need to keep it up. We’ve lost four times this season and every time we beat ourselves. We can’t do that again.”

East, meanwhile, finds itself at a crossroad and in danger of missing the 3A state playoffs.

By Mike London mike.london@salisburypost.com SALISBURY  — This is a Catawba baseball team without any preseason All-America mashers. There are no... read more