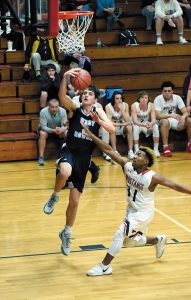 GRANITE QUARRY — Anyone who thinks West Rowan has raised the white flag on its troublesome boys basketball season got a rude awakening Friday night.

The Falcons displayed more vigor and cohesiveness than they had all year in a 66-57 North Piedmont Conference victory at East Rowan, rallying from a fourth-quarter deficit to post their first league win.

“I’m not thinking about what the people say or what we hear. I’m just thinking about my team,” coach Mike Gurley said, after West (3-16, 1-5) snapped a four-game losing streak. “We felt like we played with every team in the conference the first time. We’ll just see how we do the second time around.”

They’re off to a good start. West received a game-high 27 points from senior Payne Stolsworth and avenged a pair of two-point losses to East (9-10, 2-4).

“It feels great to finally get a conference win, especially here,” Stolsworth said, after draining three of his six 3-pointers and scoring 12 points in the decisive final period. “It’s always hard to play in Granite Quarry on a Friday night.”

A perfect example came with West holding a precarious 55-51 lead, as the clocked ticked through its final minutes. Stolsworth’s 75-foot inbounds pass led to a scramble of missed shots until senior Bryson Moss corralled not one, but two consecutive offensive rebounds before hitting a put-back layup with 1:12 remaining.

“I felt I had to step my game up,” Moss said, after netting 15 points. “I just kept fighting hard for rebounds and never gave up.”

Three seconds later, Moss was part of a frantic defensive scheme that forced a costly East turnover on the ensuing throw-in. Then his offensive board and high-rise layup gave the Falcons a 59-51 advantage with 57 seconds to go.

“I’ll bet we turned the ball over 25 times,” said Misenheimer. “When you turn the ball over 20-plus times, there’s a slim-to-none chance you’re going to win the basketball game.”

Gurley praised Moss for his intense, two-way play during the pivotal juncture. “When Bryson made that first play, it really jazzed him up,” explained the 22nd-year coach. “Then his instincts took over. On the inbounds play, I don’t think he hit the ball, but he jumped in there and made the guy change the pass — and it went high.”

East was paced by sophomores Sammy Pinckney (14 points) and David Jordan (12). The Mustangs buried 10 3-pointers, the last when Brandon Jefferson’s laser beam gave them a 51-47 lead with 5:48 to play. Stolsworth had six 3-balls for West — most from deep in the corners with defenders in his face — and went 3-for-4 from the free throw line in the last minute.

“It was like Christmas morning when we looked up in the last minute-and-a-half and saw we had the lead,” Gurley said, in a shredded, post-game voice. “I would have hated to lose this game tonight, but they haven’t let me down all year. They’ve been playing hard and keep playing hard. Tonight it turned into a W.”