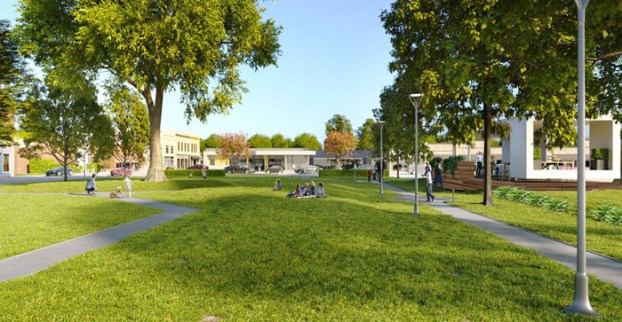 An architect's visualization shows the design for municipal offices and a park at Park Plaza in Spencer.

The town plans to move administrative offices and the Police Department moved into the space, along with the construction of a green space.

While the department is still set to cover the difference, Town Manager Terence Arrington said a change in the funding process meant the town had to front the money before receiving a reimbursement. The $268,000 was taken from the town’s fund balance for closing the sale.

“That was another curveball in this project,” Arrington said.

Additional struggles arose during final closing talks. Local dentist Kenneth Washko, who also owns part of the shopping center, did not sign the waivers necessary to proceed with the original proposed architectural design of the project.

As proposed, the architectural design would alter allotted entrances and exits from the Washko property. Without Washko’s consent to the changes, the plans would need to be redrawn.

That could cost the town an additional $19,000, said Arrington. It will also require secondary approval from the USDA and the town’s Historic Preservation Commission.

Arrington said he believes this expense and delay could have been avoided if covenants about the entrances and exits were settled before the initial sales agreement with Plaza owner PI Holdings was signed.

“We could have saved the town that money by at least bringing Dr. Washko to the table in the beginning,” he said. “Instead, it was done at the back end as we were getting to the closing table.”

Spencer Mayor Jim Gobbel said he still sees the closing as a win for the town despite the unexpected delays.

“I’m glad that we’re starting to connect the dots,” Gobbel said. “This has been a long and drawn-out process. Maybe now something will start to happen that people can see rather than have to just read about.”

Gobbel said it could be as late as July before the project moves forward, given the redraw and funding uncertainty with the USDA.

Uncertainty lingers as the federal government could had a second shutdown, meaning USDA’s operating budget would not be approved.

“They’ve got to approve their budget before they can approve ours,” Gobbel said.

Spencer picks White to fill vacancy on town board

SPENCER — In a divided vote Tuesday, the Board of Aldermen appointed Howard White to fill a vacant seat on... read more