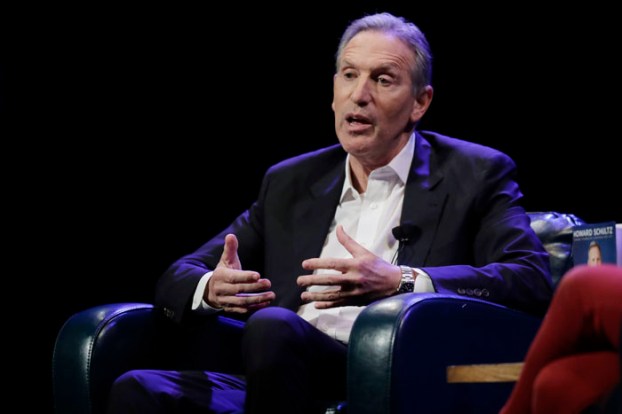 Former Starbucks CEO Howard Schultz speaks Thursday at a promotion for his book, "From the Ground Up," in Seattle. Ted S. Warren/Associated Press

Cokie and Steven Roberts: The rise of the disrupters

Howard Schultz, the former head of Starbucks, and Larry Hogan, the governor of Maryland, could seriously disrupt the political landscape if they decide to run for president next year. And for anti-Trumpers, the choice is clear: Encourage Hogan to get in, and tell Schultz to get lost.

Hogan, a highly popular Republican in a deep blue state, is contemplating a challenge to President Trump in the Republican primaries, and history teaches a powerful lesson. Over the past 50 years, four incumbent presidents have faced strong primary opposition, and the internecine warfare left every one of them mortally wounded.

Gerald Ford in 1976, Jimmy Carter in 1980 and George H.W. Bush in 1992 were all defeated for re-election. In March 1968, Sen. Gene McCarthy won 42 percent of the vote against President Johnson in New Hampshire’s Democratic primary, and a few weeks later, Johnson ended his campaign.

In 2016, Bernie Sanders badly damaged Hillary Clinton by refusing to concede defeat until July and instigating his followers to distrust the nominating process and disdain the Democratic nominee. Academic analysts estimate that between 6 percent and 12 percent of Sanders voters backed Trump, enough to swing three states that provided the president’s margin of victory — Wisconsin, Michigan and Pennsylvania.

Schultz is threatening to run as a third-party “centrist independent,” and his vast wealth plus a vow to qualify in all 50 states is causing nasty flashbacks for Democrats. The virtually unanimous reaction among party leaders was expressed by Washington state Chairman Tina Podlodowski: “I have just two words for Howard Schultz on a potential run for president as an independent. Just. Don’t.”

Democrats bitterly recall that Ralph Nader received about 97,000 votes in Florida in 2000, while George W. Bush beat Al Gore in that state — and clinched the presidency — by a mere 537 votes.

Democrats also resent two other insurgent candidates, libertarian Gary Johnson and Green Party nominee Jill Stein, who together won about 6 million votes in 2016. “A small but still significant number of left-wing voters may well have thrown the election to Trump,” wrote Hillary Clinton.

Of course, the Clintons also profited from a third-party candidate in 1992, when Ross Perot garnered 19 percent of the vote and helped Hillary’s husband, Bill, defeat Bush 41 while winning only 43 percent.

All this talk of primary and third-party challenges is turbocharged by the elections last fall and the recent government shutdown that devastated Trump’s standing. Suddenly, the president seems more vulnerable than ever, and The New York Times reports that Trump advisers are “growing anxious that he could face a draining primary” next year. Moreover, “they are pessimistic about his path to 270 electoral votes after his party’s midterm defeats” in key Midwestern states.

Trump’s core supporters remain fervently loyal, but they account for roughly one-third of the electorate, not nearly enough to guarantee him a second term. A new Washington Post/ABC poll finds that only 28 percent of all voters say they will “definitely” support the president for re-election, with another 14 percent saying they are possible Trump voters. A clear majority of 56 percent say they will “definitely not vote for him.”

Trump’s approval rating stands at 37 percent, down 4 points from October and only 1 point above his career low. Over his first two years in office, Trump’s average favorable score stands at 38 percent, by far the lowest of any of the 12 presidents who have served since modern polling began after World War II. This dismal showing is fueled mainly by women, with only 27 percent liking the president these days, down 9 points since November.

The government shutdown hurt the president badly. In an AP survey, 60 percent placed a “great deal” of the blame on his shoulders, while only about one-third said building a wall on the Southern border would make the country “safer.” That episode exacerbated doubts that already existed about Trump’s personality. Only 35 percent in the ABC/Post survey trust him to “make the rights decisions” for the country, about the same number that finds him “honest and trustworthy.”

Trump is in serious trouble, and the forthcoming report from special counsel Robert Mueller is likely to ignite even more political turmoil. Hogan and Schultz are only the first of many disrupters who will take a turn in the spotlight and make the next 21 months one of the most volatile and unpredictable periods in recent political history.

Letter: Candidates don’t get what they want