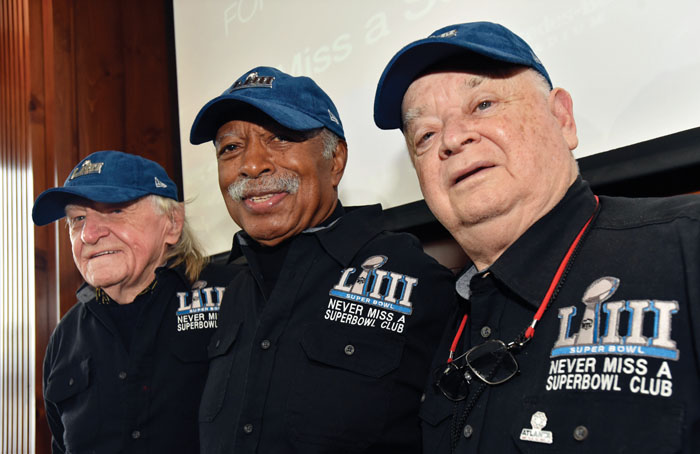 Members of the Never Miss a Super Bowl Club, from left, Tom Henschel, Gregory Eaton and Don Crisman pose for a group photograph during a welcome luncheon in Atlanta on Friday, Feb. 1, 2019. (Hyosub Shin/Atlanta Journal-Constitution via AP)

By CHARLES ODUM, AP Sports Writer
ATLANTA (AP) — Don Crisman knows precisely when the streak began: Jan. 15, 1967. The ticket price for the Super Bowl at the Los Angeles Memorial Coliseum was $12.
“Good seats,” Crisman, 82, said. “You could buy $6 tickets, and $10. There were three prices.”
On Sunday, Crisman, Gregory Eaton and Tom Henschel will attend Super Bowl 53 . They’re the last surviving members of the Never Miss a Super Bowl Club, the only known fans with a perfect attendance record for the NFL’s biggest game.
“I’ve missed weddings, I’ve missed funerals, but I’ve never missed a Super Bowl,” said Eaton, 79, from Lansing, Michigan. “Anyone in my family knows don’t plan anything because I’m gone that week.”
Ticket prices have soared through the years. Eaton said he paid $2,000 for his ticket to Sunday’s Rams-Patriots game. The most he paid was $3,000 for Super Bowl 48 in East Rutherford, New Jersey, in 2014.
Now, as the Rams prepare to face Tom Brady and the Patriots on Sunday, preserving the streak is more important than the cost. And it has not been a smooth ride the whole way.
Henschel, 78, a Steelers fan who lives near Pittsburgh, had his near-miss in New Orleans for Super Bowl 6 in 1972.
“I partied a lot on Bourbon Street and woke up at 5 or 6 in the morning and couldn’t breathe,” Henschel said. “I was on all fours. I finally got outside on the street and a police officer took me to a hospital. The next thing I know I’m in the ER with an IV in me and oxygen.
“… They rolled me into a room and I’m feeling good and a nun came in and said ‘You’re going to be under observation the next 24 hours.’ I said ‘Sister, you don’t understand, I’ve got to go to this game.’ She said ‘No, you’ll be able to see the game on TV.’ Right after she walked out, I took my IV out and oxygen off and I left. They’ve never seen me since.”
Crisman almost missed Super Bowl 2 in Miami when a storm forced his private plane to land at an abandoned Air Force base in South Carolina. He finally had a take a 24-hour train ride before arriving in Miami only a couple hours before the Packers-Raiders game.
“My streak almost ended before it began,” he said.
Crisman distributed Super Bowl 53 club shirts to Henschel and Eaton when they met at a luncheon in downtown Atlanta on Friday. It’s a unique club for the three who become mini-celebrities once a year.
Crisman, a Patriots fan from Kennebunk, Maine, offered a toast to former members who have died, including Larry Jacobson six months ago.
Crisman said Jacobson was a “one of a kind” fan who also had streaks of attending 54 consecutive Rose Bowls and 15 Summer Olympics.
As a Patriots fan, Crisman has had much to cheer about in recent Super Bowls. He said New England’s comeback win over the Atlanta Falcons two years ago is his favorite Super Bowl memory.
“I had that one in the loss column at halftime,” he said.
Crisman is hoping his Patriots, who lost to Philadelphia in last year’s Super Bowl , can win their sixth title. For now, Henschel’s Steelers have the record with six.
The smack talk between Crisman and Henschel adds spice to the club’s dynamics.
“I’m going for the Rams big-time,” Henschel said. “Big-time!”
Henschel is armed with his Steelers’ Super Bowl record for anyone who would question why he’d wear a Pittsburgh jacket to a function before the Rams-Patriots game.
“What, do we need to give you a history lesson?” Henschel said before adding with a smile “That always gets them.”
Meanwhile, Eaton’s Detroit Lions have never made it to a Super Bowl. Year after year, he keeps his streak intact.
“I take one year at a time,” Eaton said. “If my health keeps going, I’d at least like four or five more.”
___
For more AP NFL: https://apnews.com/NFL and https://twitter.com/AP_NFL