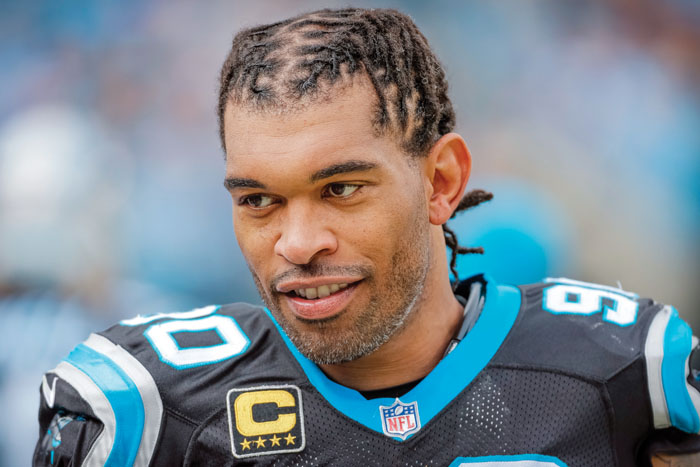 FILE - In this Dec. 24, 2017, file photo, Carolina Panthers' Julius Peppers (90) looks on from the sidelines during the first half of an NFL football game against the Tampa Bay Buccaneers in Charlotte, N.C. Peppers announced his retirement, Friday, Feb. 1, 2019, after 17 NFL seasons, nine Pro Bowl appearances and six All-Pro selections. (AP Photo/Bob Leverone, File)

CHARLOTTE (AP) — Carolina’s Julius Peppers has announced his retirement after 17 NFL seasons, nine Pro Bowl appearances and six All-Pro selections.
Peppers spent the first eight seasons of his career with the Panthers, then played four with Chicago, three with Green Bay and his final two seasons back with Carolina. He missed four games in 2002, his rookie season, then played in 254 out of a possible 256 games over the rest of his career.
Peppers finished his career with 159 1/2 sacks, fourth-most in NFL history. The defensive end is the only player in league history with at least 150 sacks and 10 interceptions — he had 11 of those — and also blocked 13 field goals and extra-point attempts.
Peppers announced his retirement in an essay published Friday by The Players Tribune. He says he still feels good, but knows football could not last forever.
“The Super Bowl ring eluded me, but I don’t need that to validate me,” Peppers wrote. “I would have loved to have helped deliver that to the fans in Carolina, but I’m content with the career that I had.”
Peppers had 97 of his sacks in a Carolina uniform, setting the franchise record there.
“Julius is one of the greatest to ever play the game of football,” Panthers coach Ron Rivera said. “To put up the numbers he did for as long as he did speaks to his incredible talent and commitment. He is a leader in the locker room and in the community. Getting to know him over the last two seasons has been tremendous because of the type of person he is.”
Peppers finished with a consecutive-games-played streak of 176, the second-longest such run in the NFL right now behind Los Angeles Chargers quarterback Philip Rivers. Peppers, who turned 39 earlier this month, also was the oldest active defensive player in the league.
“In getting to know Julius over these past months, I’ve learned that he is a man of few words. When he speaks, everyone listens,” Panthers owner David Tepper said. “With that in mind, I will be brief. He’s one of the best to ever wear a Carolina uniform. He carries himself with dignity, integrity and class, and will always be a Panther.”
Peppers played his college football at North Carolina, where he also excelled as a member of the Tar Heels’ basketball team. He was the No. 2 selection by Carolina in the 2002 NFL draft, and was defensive rookie of the year that season.
He is the Panthers’ nominee for the 2018 Walter Payton NFL Man of the Year, which will be awarded Saturday on the eve of Super Bowl LIII. Peppers has been an advocate for those adversely affected by Hurricane Florence, which hammered coastal areas in North Carolina and South Carolina last fall.
“What he did for the people affected by Hurricane Florence, getting involved and bringing them hope, says a lot about him,” Rivera said. “I’m proud that I get to say that I was one of his coaches, and I think it’s fitting that he gets to end his career as a Carolina Panther.”
___
More AP NFL: https://apnews.com/NFL and https://twitter.com/AP_NFL