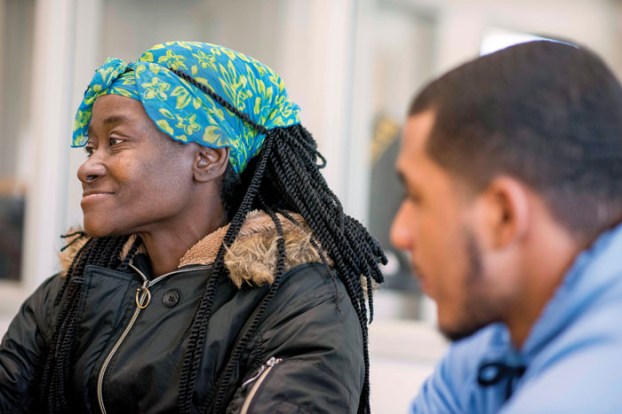 SALISBURY — In a couple of days, Willette Heggins Williams believes she’ll have to leave the place she’s staying to seek refuge at the Rowan Helping Ministries shelter.

“You gotta do what you gotta do,” Williams said matter-of-factly.

Williams, who sat down for a meal at Jeannie’s Kitchen on Thursday, also spoke with Rowan-Cabarrus Community College students about her living situation and the stigma of homelessness and took part in the Point-in-Time survey that counts the unsheltered and those staying at the local shelter.

The count is done on a single night in January as a way to get a deeper understanding of the homeless population.

“You get a screen shot of homeless people in our county,” said Kendra Coney, housing coordinator for Rowan Helping Ministries.

Coney said through the count, the agency is able to get funding for programs and services.

She said the count is an eye-opening, humbling experience.

Information from the count, which is now done through a phone app, is reported to Congress to inform policymaking and funding allocations. The results from the Point-in-Time count are reported via the app.

“It will help us understand trends and better understand the scope of the problem so that we may research ways to progress and continually evolve,” said Erica Taylor, Rowan Helping Ministries’ community relations manager.

Williams has for some time had a number of health problems including COPD, asthma and bronchitis. She also has a pacemaker, has suffered a stroke and has a deteriorated disc in her back.

She’s unable to work because of her health problems and hasn’t been able to qualify for disability benefits. She sometimes struggles to find a place to sleep. But Williams says she’d rather sleep under a bridge than continue staying where she is currently. The Dixonville native knows she can at least get a meal at the shelter.

She has family in the area, including a daughter in East Spencer. One of her four children, Jason Heggins, was murdered 10 years ago this week.

Williams sat down with RCCC freshman Joshua Mason, who shared his family’s experience of homelessness.

Mason, 18, said when his father left the Army, the family struggled to find housing and for some time lived in hotels. Mason said at the time he was 16 and reveled in the idea of living in a hotel.

“They had continental breakfast,” he said with a smile.

But what he wanted was a permanent home. He said while attending high school, no one knew that when he left he went “home” to a hotel.

Mason is a pre-med major hoping to become a physician or a physician’s assistant.

The teen, who is from the Chapel Hill area, is currently living at Nazareth Children’s Home. He said both of his parents are deceased and so are his grandparents. He’s lived in a lot of cities throughout North Carolina including Oxford, Eden and Greensboro, and he has attended many more schools. He graduated from East Rowan High School.

Blacknell said he’s had it rough, but his life experience has made him the person he is today.

“There’s always a purpose,” he said.

He’s often encountered other children like himself at Nazareth Children’s Home who complain about their parents.

“At least they have parents,” he said.

“You have a chance to change,” he said of life decisions.

Terry, a shelter guest who declined to provide his full name, said he previously lived with his daughter. He didn’t disclose what led him to seek shelter at Rowan Helping Ministries but said he’s had a tough time finding work because he doesn’t drive and receives disability benefits.

He recently missed an opportunity for housing but hopes to one day have his own place. He wasn’t always homeless, Terry said; he had a “place at the river” for 11 years. The Stanly County native has been at the shelter for about three weeks.

Another shelter guest, George, who declined to provide his full name, said he has stayed at the shelter on and off for about seven years. The 68-year-old said it’s hard to find a job, but he’s grateful that the agency is there to help people.

SALISBURY — Ahead of Wine About Winter, downtown merchants met Wednesday to go over what to expect for Friday’s event... read more