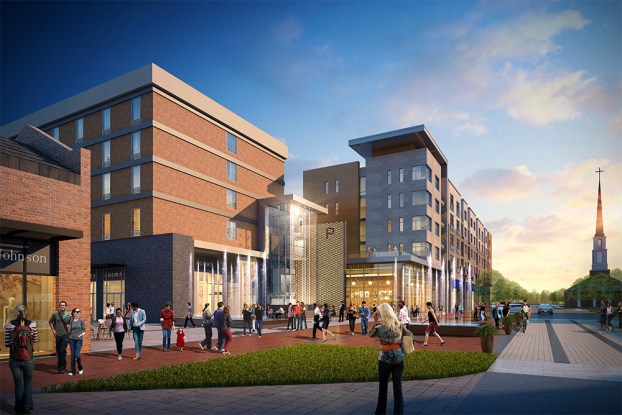 KANNAPOLIS — A $60 million investment in downtown Kannapolis inched closer to fruition this week as members of the City Council approved an updated master development agreement with Lansing Melbourne Group.

The agreement addressed the parking needs of Lansing’s up-and-coming mixed-use development between Main Street and West Avenue. Called the “Demonstration Project,” it will consist of apartments, office space, restaurants and more.

Apartment residents will make use of a city-owned parking deck to be built on West Avenue. The $12 million garage will offer 400 parking spaces.

As part of the contract approved Monday, the city agreed to waive fees for 275 spaces in the garage for 10 years — one spot for each planned residential unit.

According to City Manager Mike Legg, the developer maintained that the waiver was critical to getting the financing terms of the project.

But the contract could see some returned revenue for the city, as Lansing Melbourne Group is working toward including a hotel in its 3.81-acre development.

“The developer is in conversations with a hotel,” said city Communications Director Annette Privette Keller. “They’ve talked to several potential vendors but are not yet ready to make an announcement.”

To move forward in these conversations, Lansing compromised with the city and executed a long-term lease agreement for 96 additional spaces in the garage.

Sixty days after a hotel receives its certificate of occupancy, the developer will pay the city $1,000 per month.

This $13,750 monthly will generate $165,000 annually for the city, equal to the amount waived for residential spaces.

Legg said lease revenue will go toward the ongoing operation and maintenance of the parking garage.

The city is working to complete downtown streetscaping and infrastructure. Construction on other portions of the Demonstration Project — residential and retail spaces — should begin this spring, Keller said.

SALISBURY —A man registered as a sex offender in West Virginia was arrested Wednesday and charged in an early Sunday... read more