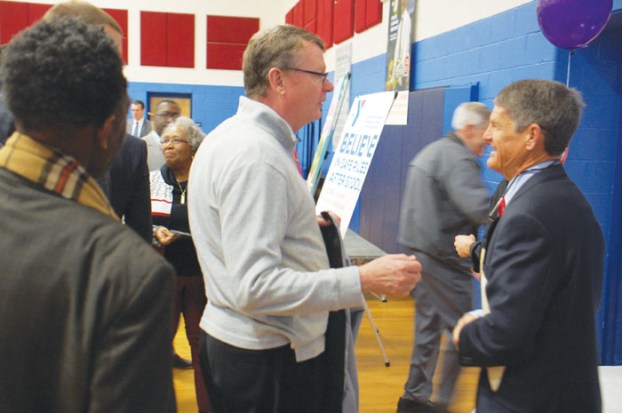 SALISBURY — Not long into his first semester in law school at the University of North Carolina at Chapel Hill, Bobby Lutz knew the legal profession wasn’t for him. He wanted to be a teacher and coach.

So that fall during a break from his law studies, Lutz went home to Catawba County, took his parents to Jones Fish Camp, sat them down in the second booth on the left and broke the news.

He was leaving law school so he could coach the junior varsity girls basketball team at Bandys High School.

His parents took Lutz’s decision as well as could be expected. Lutz remembers he paid for the dinner and set off on his new career path. It has been quite a journey.

The breakfast jump-started a $75,000 fundraising campaign for the YMCA.  Novant Health Rowan President Dari Caldwell is serving as honorary chairwoman.

Since her youthful days in Kannapolis, Caldwell has had a close personal connection to the YMCA and described it as the heartbeat of the community.

Hurley Family YMCA has roughly 9,000 members, or 25 percent of the population of Salisbury. With some support from Rowan County United Way, it operates on a $2 million annual budget and offers some $400,000 in discounts, helping to enable many people who could not otherwise afford it to use the Y’s facilities and programs.

Executive Director Richard Reinholz said the important pillars of the Hurley Family Y are community outreach, serving a diverse population, being open to all and offering something for everyone.

As one of several anecdotes, Lutz recalled a story linked to Charles Plumb, a jet fighter pilot during the Vietnam War. Plumb successfully carried out 74 flying missions, but on the 75th, and only five days before he was scheduled to return to the United States, Plumb was shot down.

He parachuted from his burning plane, was captured and spent the next six years — 2,103 days —  as a prisoner of war, most of the time in an 8-by-8-foot cell.

Plumb became a much sought-after public speaker, and he often tells the story of running into a man after one of his talks. The man informed Plumb he had served during the Vietnam conflict aboard the USS Kitty Hawk, the ship from which the fighter pilot took off on his 75th mission.

“I packed your parachute,” he told Plumb.

It became, of course, a meeting Plumb did not forget and symbolic to him of all the things — minor and major — that go into everyone’s lives.

“All of us need our parachutes packed,” Lutz told his breakfast audience.

One of Lutz’s biggest influences, in hindsight, was Bonnie E. Cone, who became president of Charlotte College after its conversion to a two-year institution of higher learning. She later led its transition in 1965 to the four-year UNC-Charlotte.

“Miss Bonnie,” as she was popularly known, is often described as the woman who launched a university through her dedication and determination. Lutz’s personal interview with Miss Bonnie came late in his senior year in high school, and it led to his decision to attend UNC-Charlotte instead of UNC-Chapel Hill.

Lutz, a star basketball player at Bandys High, failed to make the UNC-Charlotte basketball team as a walk-on. But he earned degrees in psychology and economics. Many years later, from 1998 to 2010, he would be his alma mater’s head basketball coach.

Again, he noted, it was all about dreaming big.

On her desk, Cone had the words of Edward Everett Hale prominently displayed, and Lutz gave them to his audience Wednesday as inspiration for pledging to the Y.

Hale said, “I am only one, but I am one. I cannot do everything, but I can do something. What I can do, I ought to do, and what I ought to do, by the grace of God, I will do.”

Lutz, 60, is a well-known coaching figure. His Parkwood High School girls basketball team won the state championship in the 1982-83 season, beating Bandys on the way to the title.

In 1984, Lutz went to the college ranks as a graduate assistant for Coach Cliff Ellis at Clemson, and prior to the 1986-87 season, he took the head coaching job at Pfeiffer.

Over nine years at Pfeiffer, he compiled a 181-91 record. For six consecutive years, Lutz won the Carolinas Conference regular season and tournament titles. He led the Falcons to the NAIA playoffs in those six years and three times to the NAIA Final Four.

Gardner-Webb University hired Lutz to be its men’s basketball coach in 1995, but after two weeks, Lutz resigned so he could take a job as assistant coach at his beloved UNC-Charlotte. By 1998 he was head coach, and over eight of his 12 years, Lutz had the 49ers in postseason play — five times in the NCAA tournament and three times in the NIT.

After being fired by UNC-Charlotte after the 2009-10 season, Lutz spent a year as an Iowa State assistant. He became familiar to Atlantic Coast Conference fans as an assistant and associate head coach with N.C. State University from 2011 to 2016.

Lutz was assistant coach with the Windy City Bulls in the NBA’s Development League during the 2016-17 season.

Incoming Y advisory board Chairman Tom Childress, a former athletic director and administrator at Pfeiffer, said Lutz is now a coaching consultant and also has started a radio call-in show in Charlotte.

“He has fire in his belly,” Childress said, “and he wants to coach one more time.”

When she was growing up, Caldwell said, every child in the Kannapolis school system could be a member of the Y for $1 a year.

“It (the Y) really formed a lot of the character” of the people in the Kannapolis community, Caldwell said. She participated in Y programs most of her childhood, from tadpole swimming classes to becoming a camp counselor.

The Y gave her important mentors and the opportunity to spread her wings and learn about leadership and working with others, Caldwell said. And with the Y, your socioeconomic status didn’t matter.

“It was a wonderful experience growing up there,” Caldwell said.

Lutz’s youthful connection to the YMCA goes back to a roving instructor the Y provided to his elementary school for flag football and basketball.

It became Lutz’s introduction to organized competition among schools and fueled that fire in his belly he has had ever since.

MOUNT ULLA — Overhead, Stephen Hochstettler and Daniel Hochstedler were working off a lift and affixing the sign for the... read more