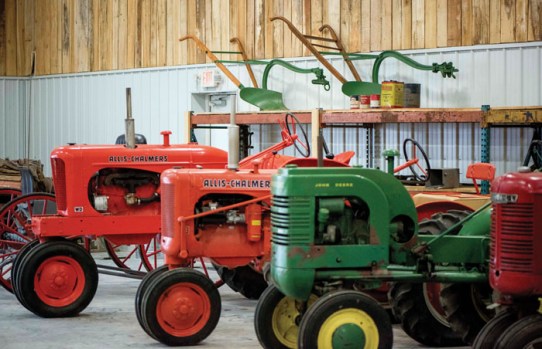 Tractors and farm equipment will be on display at the new museum. Jon C. Lakey/Salisbury Post 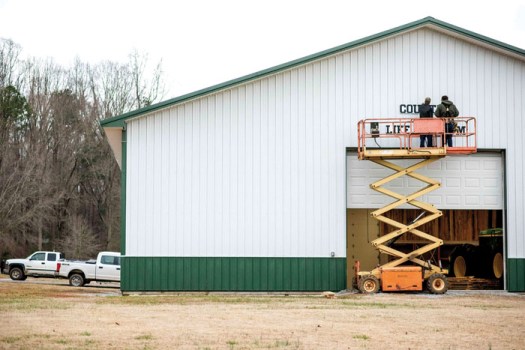 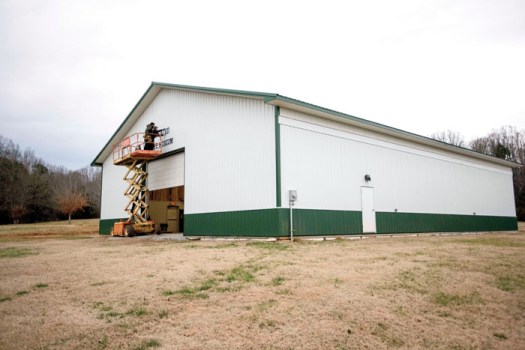 The Country Life Museum could be open on certain by spring. Jon C. Lakey/Salisbury Post

MOUNT ULLA — Overhead, Stephen Hochstettler and Daniel Hochstedler were working off a lift and affixing the sign for the Country Life Museum.

And down on the ground, Randy Elium admired their progress. Earlier Tuesday morning, a friend had called Elium and asked what he was doing.

“We’re putting the flag on the ship,” Elium told the caller. “We have arrived.”

Until now, you might have wondered what that big metal building off Sloan Road and along the entrance drive to Rowan County’s Sloan Park is. Now the newly installed signs on both ends of the building tell you — it’s the Country Life Museum.

“This will finally make it to where people will know what’s going on here,” said Elium, president of the Carolina Antique Power Association, which has been working for several years to make the museum a reality.

Come May, the exterior of the 4,800-square-foot building might be making an even stronger statement to passers-by on Sloan Road or visitors to the park.

By then, 12-by-12-foot barn quilts could be installed on each side of the big door on the eastern end of the building. And who knows, the museum itself might be open for visitors on certain days.

As with many other things connected to the museum’s development, a lot of donated time and materials went into the signs and their installation.

Metalworker Jerry Lambert of Faith did the 12-inch lettering for free. David McKay donated the powder-coating and tracks the letters sit within on the building.

Timothy and Stephen Hochstettler and Daniel Hochstedler, who work for A.W. & Sons Construction of Salisbury, donated their time Tuesday morning to install the signs. They worked quickly and were done by 9:43 a.m.

“Everybody’s been a big help for this whole project,” Elium says.

Recalling the words of Adele Goodman, who is helping the group with marketing ideas, Elium said the museum has evolved in three phases.

The first was to raise money and erect the large building, which was done by Mid State Metals. The second was to install wiring, lighting, shelving and paneling on the inside, mostly accomplished by volunteers or people who donated materials and professional services.

The third is to provide something to see on the inside. On that account, things are taking shape as Carolina Antique Power Association members find places for artifacts reflecting the farm and rural life theme.

You can’t help but notice the 1976 John Deere 8430 tractor on loan from Tom Smith. It’s as big as a tiny house and weighs almost 20,000 pounds. Across the way is a row of smaller antique tractors, four of which were donated to the museum by the Jackson family.

The tractors include names such as John Deere, McCormick Farmall and Allis Chalmers.

Elsewhere — and this is just calling items out at random — are horse-drawn plows, a buggy, a hand-cranked seed cleaner, an antique drill press, an old-fashioned salad shredder, a log cabin tool, a portable chicken pen, pulleys and a fireproof recording-keeping box from the old R.L. Lyerly & Sons store in Granite Quarry.

“Other things are starting to come in,” Elium said.

He is particularly excited about a milk bottle collection that the Graham family will be providing.

Elium already is thinking about a spot for a 2,800-pound store safe from James River Equipment, his former employer. He and his wife, Pam, are recently retired from James River.

There are still some enhancements volunteers will make to the donated Food Lion warehouse racks that serve as shelves. They also plan to section off an office area in one corner.

Organizers hope the museum can hold future programs, besides being a community meeting place. To date, some 180 metal folding chairs have been donated or are available when needed.

“It just takes time, and you do a bit at a time,” Elium said.

Members of the antiques association will be curators of what they hope can be rotating exhibits, and they will be among the volunteers staffing the museum when it is open, which might be as early as this spring.

The Country Life Museum could turn out to be a starting point for people who want to take self-guided barn quilt tours in Rowan County.

Elium said the association will seek N.C. Department of Transportation approval to place a directional sign on N.C. 150 that incorporates a small barn quilt and points the way to the Country Life Museum.

Members are selling 2019 barn quilt calendars, which Pam Elium says are keepsakes in themselves for the history and photography.

The association also is raising money for the two barn quilts at the museum. Artist Elsie Bennett will donate much of her time, but roughly $1,200 is needed to cover the wood, paint and hardware for each square.

Elium is hoping the guys from A.W. Construction & Sons can help with installing the quilts.

When that day arrives, things will be looking up for the Country Life Museum.