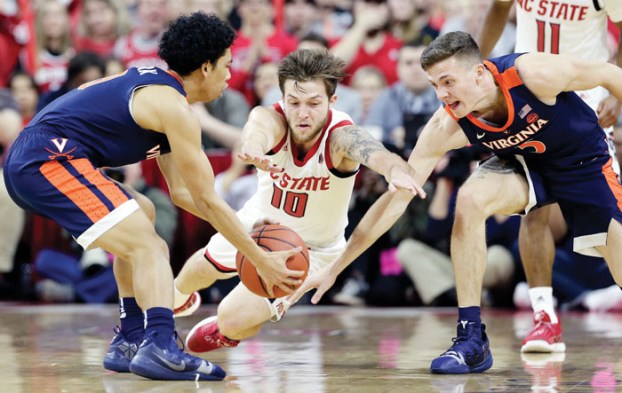 No moral victories wanted by the Wolfpack 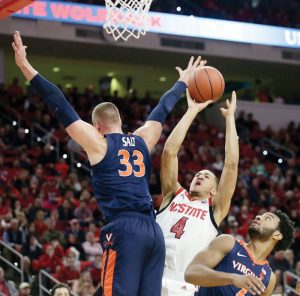 RALEIGH (AP) — The mistakes kept piling up for third-ranked Virginia, which was careless with the ball, struggled on the offensive glass and squandered a double-figure lead in the second half.

Fortunately for coach Tony Bennett, the Cavaliers still managed to squeeze out a road win against a ranked opponent. Kyle Guy hit the go-ahead 3-pointer with two minutes left in overtime and Virginia held on to the horn to beat No. 23 North Carolina State 66-65 on Tuesday night.

“We’ll live and learn,” Bennett said. “Fortunate to get out of here.”

Indeed, Virginia (19-1, 7-1 Atlantic Coast Conference) went from controlling the game’s flow in a hostile environment to blowing a 14-point lead and then having De’Andre Hunter improbably foul N.C. State’s Markell Johnson on a forced-up 3-pointer for the tie in the final seconds of overtime.

Johnson — who had hit two free throws with 29.7 seconds left in regulation to force overtime — missed the first free throw, made the second and then sank the third while apparently trying to miss. Ty Jerome then inbounded the ball to Guy, who flung it to the other end of the court as time expired.

“It was a feeling of relief,” Guy said. “That was a bad game on our part. Coach was rightfully mad after the game and got after us, because we did not play anywhere near our standard. And he holds us to a high standard, so we know we didn’t play very well.”

Virginia came in ranked No. 1 nationally in KenPom’s turnover percentage rate (13.5 percent), but matched its season high with 16 turnovers on 67 possessions (23.9 percent) — with one of those being a 10-second violation for failing to get the ball across midcourt.

N.C. State also grabbed 16 offensive rebounds, the most allowed by the Cavaliers all season, and rallied despite shooting just 34 percent.

“There’s no moral victories,” said Devon Daniels, who had 10 points for the Wolfpack. “But that just tells us we’re right there. If we can clean up a few things … we can win the game.”

Virginia: The Cavaliers didn’t have an easy time of it, yet still improved to 14-1 in ACC road games over the past two seasons. Virginia also showed some vulnerability to physical play inside, giving up too many second chances amid foul trouble for Jack Salt and Hunter, both of whom fouled out.

N.C. State: The Wolfpack has followed a win-one-then-lose-one pattern in ACC play, the last being a frantic rally to beat Clemson on Braxton Beverly’s buzzer-beating 3-pointer Saturday. The pattern continued at the start of a brutal stretch for the Wolfpack, with three games in a week against teams ranked 12th or higher.

“I told the team after the game it’s OK to be disappointed,” Wolfpack coach Kevin Keatts said. “Certainly I thought we fought our hearts out.”

Hunter had 15 points, five rebounds and four assists for Virginia, though his body-bump of Johnson nearly led to another overtime.

Guy had a rough shooting game, but his only made 3 was huge.

Tied at 61-all, Jerome drove into the paint when N.C. State’s Wyatt Walker reached in and knocked the ball loose. Jerome regained control enough to direct the ball to Guy, who caught the ball and buried the step-back 3 over Johnson.

and seven rebounds for N.C. State. … The game was stopped briefly with 9:26 left in the second half for officials to warn the crowd — irked by just about every whistle or non-whistle — not to throw anything onto the floor. Keatts followed by taking the microphone and asking the same.

N.C. State: No. 12 Virginia Tech visits the Wolfpack on Saturday.