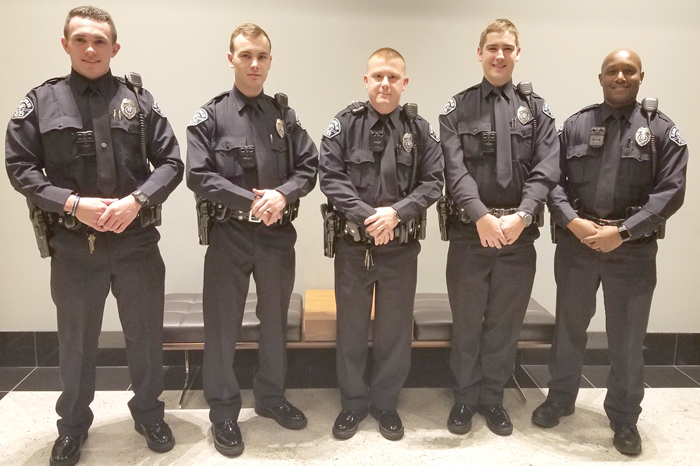 As part of their field training, each officer will be assigned to two experienced officers in the patrol division for the next five months.

Barnes is a graduate of West Davidson High School and St. Leo University with a bachelor’s degree in psychology. He was a sonar technician and supervisor in the Navy before joining the Police Department.

He is married to Courtney and they have a daughter, Aubrey, and a son, Colton. Barnes is the son of Ronald and Sharon Williams Barnes of Lexington.

Crowe is a graduate of Crowe Christian Academy and studied criminal justice at Rowan-Cabarrus Community College. Before joining the Kannapolis police, he was employed by Aldi as a forklift operator.

He is married to Jessica and they have a son, Owen. Crowe is the son of Todd and Kimberly Crowe of Concord.

Franklin had been an assistant manager at Auto Bell Carwash. He is a graduate of Concord High School and studied criminal justice at Rowan-Cabarrus Community College and Western Carolina University.

Franklin is the son of Robert and Sandra Smith Franklin of Concord.

Johnson was the warehouse manager for Troutman’s Bar-B-Que. He is a graduate of Concord High School and studied criminal justice, religion and automotive mechanics at Rowan-Cabarrus Community College.

Johnson is the son of William Johnson and Terrie McCarn Johnson of Concord.

Moore is a graduate of West Davidson High School and the University of North Carolina at Charlotte with a bachelor of science degree in accounting. He was a commercial development portfolio manager for U.S. Bank before changing careers.

Moore is married to Eboni, and they have a son, Aiden. Moore is the son of Jimmy Lee Moore and Billie Jo Moore, both of Lexington.