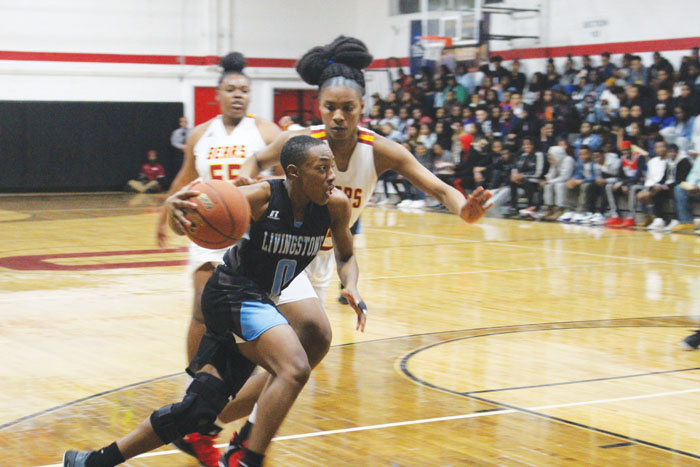 The victory was the third straight for Livingstone, following a 12-game losing streak. The Blue Bears improve to 6-15 overall and 3-8 in the conference.

Coach Tiffany Silver’s Livingstone squad took advantage of the poor shooting and turnovers of St. Aug’s, especially in the first half.

Meanwhile, the Blue Bears, despite beginning the game with a 7-0 deficit, shot well in the first half (13-of-32) and committed just six turnovers. Livingstone caught up very quickly and began pulling away, holding a 17-point halftime lead (36-19).

“It feels great to win again,” said Silver. “The kids are believing in themselves, trusting the process and they’re having fun.”

Silver said that her team did feel a little snakebit during the losing skid, but knew that injuries had been a factor.

“We’ve battled injuries all year and we’ve only had one game that our entire team was cleared to play, then a player went down with a concussion in that game,” Silver continued. “We’re still down a player (I’keya Bland) who is high in our rotations.”

Silver added that she saw improvement, even in losses, especially last week at home against Claflin (66-59) and Fayetteville State (71-68).

“Against Claflin, we played better, then got a little closer against Fayetteville State and then finally put it all together against J.C. Smith (76-57 win),” said Silver. “Our biggest focus was trying to push on and to try to get better by February. Again, the girls are playing together and believing in each other.”

Harris, who has been leading Livingstone in scoring throughout the season, led the team with 16 points, including 11 in the first half. Allen scored 13 points, one of her better scoring games of the year, and Green added 11 points.

Livingstone kept the Falcons from making any kind of a comeback move in the second half, leading by as many as 22 points. The Blue Bears led at the end of the third quarter, 50-30.

Darra Walker, who has been on a hot streak in recent games for Livingstone, scored only nine points, but all were in the first half when the Blue Bears were building their advantage.

For the game, Livingstone took much better care of the basketball, committing just 12 turnovers. Meanwhile, the Falcons had 21 miscues.

NOTES: Silver added that during the losing streak, her team received a lot of support: “We appreciate everybody who stayed with us though that tough stretch and helped us push through it.” … The Blue Bears have another big road game on Saturday, at Winston-Salem State (2 p.m.).