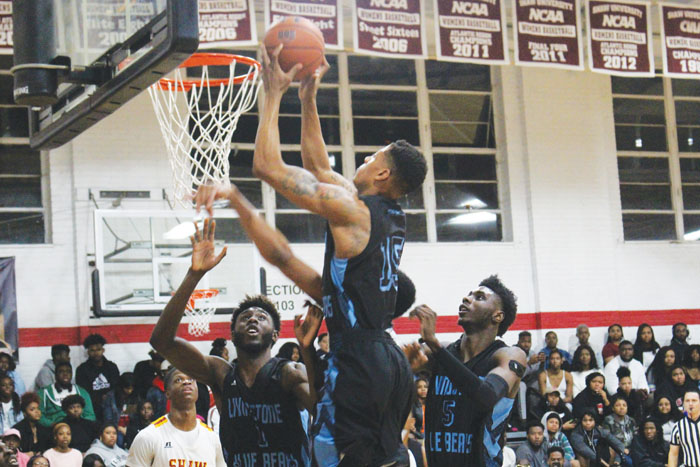 Oralia Washington/Livingstone sports info Livingstone's Malik Smith (15) goes to the basket against Shaw. Shaw won the game, but the Blue Bears bounced back against St. Augustine's on Wednesday.

The Blue Bears, winners of six of their last seven games, bounced back from a lop-sided defeat on Monday night at Shaw to improve to 13-7 overall and 6-5 in the CIAA. They also continue to lead the league’s Southern Division.

Livingstone was down by 12 points in the first half (30-18), but guard Roger Ray scored the last five points of the period to close the gap to 30-23 at intermission.

The Blue Bears held the lead for most of the remainder of the second half, until St. Aug’s Tyre Gathright was fouled by Ray on a 3-point attempt with just 16 seconds left in regulation. Gathright, who led all scorers with 27 points, calmly sank all three foul shots, tying the game at 58-58.

In overtime, Livingstone led throughout until Mel’Quan Ames buried a 3-pointer with 58 second left, tying the score at 66-66. But Ray redeemed himself for the foul at the end of regulation by sinking a jumper in the paint for a 68-66 lead with 31 ticks remaining.

LC’s Malik Smith blocked a potential tying shot by Ames and then Gathright missed a layup with four seconds left. Elmore grabbed the rebound, was fouled and made a free throw for the final margin. Gathright had a desperation 3-point try at the buzzer that missed.

Ray followed Elmore’s 17 points with 14 of his own. He also had seven rebounds and seven assists. Damante McNeill scored 13 points for the Blue Bears.

NOTE: Livingstone travels to Winston-Salem State on Saturday for a big CIAA game at 4 p.m., following the women’s game.