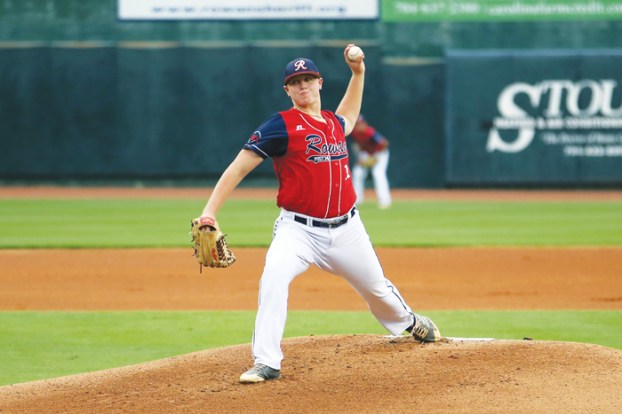 James Sipes FILE PHOTO/for the Salisbury Post Daniel Durham fires to home during a 10-6 win over Randolph County, in the Area III championship series (Game 2) last July 19. Durham, who has signed with Catawba. was 4-1 last summer, with 51 strikeouts, as Rowan went 33-12.

Another local hurler heading to Catawba 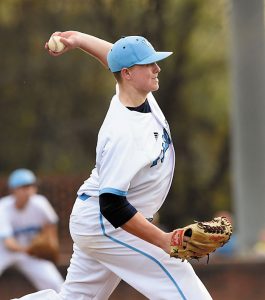 A lot of people weren’t sure what sport West Rowan lefty pitcher/linebacker Daniel Durham would pursue in college, but the 6-foot-1, 215-pound Durham has known for a while.

“I really like football, but I think my mindset has always been that I’d play college baseball,” Durham said at his signing party in the West media center.  “And throughout the recruiting process, Catawba was always at the top of the list.”

Durham has signed with coach Jim Gantt’s Catawba Indians. There’s no doubt that his best baseball is ahead of him. Durham threw last summer for the Rowan County American Legion team like no one had ever seen him pitch before. Gantt, also the head coach of the Rowan Legion team was impressed.

“Daniel has been a good high school player for us, an All-North Piedmont Conference player,” said Seth Graham, the West head coach and a Rowan Legion assistant. “But then he had a chance to pitch in some really big Legion games last summer, and he responded. He took it to another level.”

Among those excited about Durham’s college destination is West head football coach Joe Nixon, a Catawba graduate. Durham was a first team all-county linebacker for Nixon.

“Daniel was a rock for our football program the same way he was for the baseball program,” Nixon said. “He never missed a baseball workout, but he also never missed a football practice. I’m always excited when a kid gets a college scholarship, and it’s great to see a dual-sport athlete who played two sports for his school getting a scholarship. A lot of people believe you have to specialize. Here’s more proof that you don’t.”

There were days when Durham had to hustle from a practice in one sport to a workout for another one, but he handled it.

“I never looked at playing two sports as a problem,” Durham said. “I looked at it as fun.”

The sturdy southpaw made an impact on the West varsity as a sophomore, turning in a 3-3 record with a 2.31 ERA and 23 strikeouts. Graham wasn’t surprised. He’d seen enough of him as a freshman to know he’d be successful.

As a junior, Durham was 3-2 with a 3.18 ERA and 28 strikeouts. Pitching in the NPC for a team that batted .228, it wasn’t easy to accumulate victories, but in his 11 appearances, Durham usually gave the Falcons a chance to win.

Graham talked up Legion ball to Durham and he decided to play last summer. He became part of the rotation and was instrumental in Rowan’s 33-12 season that included the Area III championship and a trip to the state tournament.

“Coach Gantt pushed us hard, but he also made it a lot of fun,” Durham said.

Durham was 4-1 with 51 strikeouts in 54 2/3 innings. He went the distance in his only setback — losing to High Point in the bottom of the seventh in the Area III semifinal series.

He came through with several huge wins, including a tenacious effort that beat Caldwell County in Rowan’s opener in the state tournament.

“He’s a good person, and we really like him as a pitcher,” Gantt said. “He’s a bigger guy who throws strikes and he has good stuff — fastball, breaking ball, changeup.  That football mentality he has really helps him in baseball. He competes. He’s never afraid. When he goes out there to the mound, he goes out there to win and he’s not even thinking about losing.”

Payne Stolsworth, Durham’s teammate in baseball and football, said Durham has been a great teammate. They’ve known each other about eight years, dating back to their early AAU baseball days with the Rowan Razorbacks.

“Daniel is just a good dude,” Stolsworth said. “There was never a day when he didn’t want to practice hard. He always worked, and it’s paid off for him.”

Graham expects good things from Durham at Catawba. He still has his senior baseball season left to play for the Falcons, but he’s already been a special guy in terms of work ethic.

“Teenage athletes, there’s a lot of distractions out there, a lot of things that can take them off course,” Graham said. “Daniel is a guy we’ve never had to worry about doing the right thing, and he’ll be the same way at Catawba.”

By Mike London mike.london@salisburypost.com GREENVILLE, N.C. —  John Owen will be back at his home away from home at Newman... read more