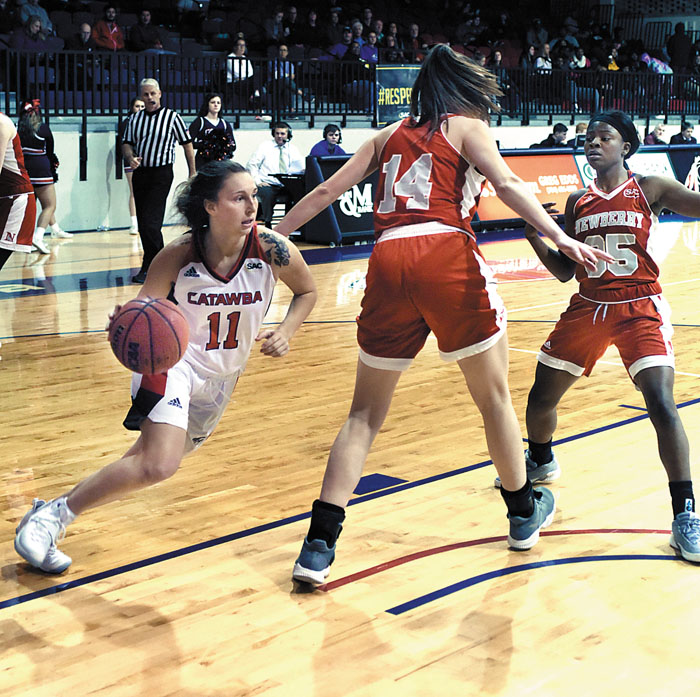 SALISBURY  —There’s no substitute for experience, and Newberry’s women made knowledge and poise pay off on Wednesday night.

The seasoned Wolves dominated the fourth quarter, roared from behind and beat Catawba, 76-68, at Goodman Gym.

“Their juniors and seniors played like experienced players are supposed to play in the fourth quarter,” Catawba head coach Terrence Baxter. “And our young girls played young.”

It was a frantic, very even first half, with Catawba surviving sizzling shooting by the visitors — 57.1 percent from the field — to get to halftime with a 41-39 deficit. Sophomore post player Talia Barnes and sophomore wing combined for 23 of Catawba’s first-half points.

Then the third quarter belonged to the Indians. Catawba’s huge advantage in the turnover column started paying dividends, and Barnes lit up the Wolves in the paint with spin moves. By the end of the third quarter, Barnes had 21 points, the Wolves were in desperate foul trouble, and guard Madi Hallman, who was getting the ball to Barnes frequently, had eight assists. Catawba led, 58-53, and appeared headed for a payback victory.

But Catawba’s dreadful start to the fourth quarter changed everything. Catawba’s first six possessions of the quarter were three turnovers and three one-and-done misses, and the Indians went from up five to down four in a span of three minutes.

Emily Phillips made a 3-pointer to finally break the Catawba drought, but the Indians never caught up.

Newberry was sagging to take away Barnes, and the Indians, who went 5-for-20 from the 3-point line, couldn’t find the range often enough from outside.

Newberry forward Kesley McDermott hadn’t been much of a factor, but she suddenly became dynamic in the fourth quarter, slicing to the rim for layups. Newberry’s 6-foot-3 Meg Essex hadn’t made much of an impact either, but in the fourth quarter she took over the paint, quieting Barnes and grabbing every rebound.

“It was winning time, their girls know how to win, and they did what they were supposed to do,” Baxter said. “Our girls are still learning how to win.”

The tradeoff was that Wampler expended so much energy on the defensive end, she never got anything going offensively. She didn’t make a field goal, and no one else was able to compensate.

“What I was most disappointed about was our defense,” Baxter said. “We’ve got to get back to defending the way we were earlier in the season.”

Catawba had a 19-10 edge in the turnover battle, but the Wolves compensated with a 39-25 rebounding edge. … Newberry shot 51 percent for the game to Catawba’s 38 percent. .. Barnes finished with 21 points, while DeShazo had 18 points and eight rebounds. Hallman got one assist in the fourth quarter to finish with nine and also scored nine points. Phillips scored eight off the bench. Elizabeth Webb made a game-tying 3-pointer during Catawba’s surge in the third quarter. … Early foul trouble limited Shemya Stanback, who played only 13 minutes. “That was a factor,” Baxter said. “That meant Hallman had to play a lot more minutes (33) than we like for her to, and she was tired in the fourth quarter.”