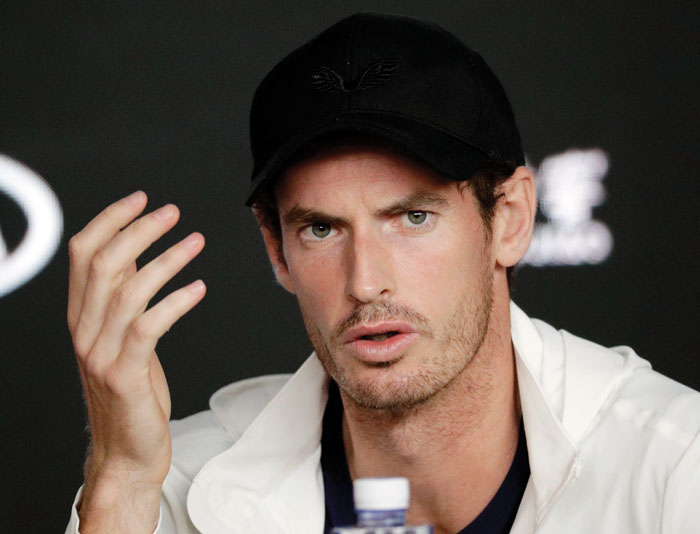 By HOWARD FENDRICH, AP Tennis Writer
Andy Murray did have a second hip operation, after all, getting a metal implant one year after his first procedure on the joint.
The three-time major champion posted a message Tuesday on Instagram saying that he had the surgery in London on Monday.
“Feeling a bit battered and bruised just now,” Murray wrote, “but hopefully that will be the end of my hip pain.”
What’s not known with any certainty yet is what this might mean for the 31-year-old Murray’s future in tennis. Before the Australian Open, where he lost in the first round on Jan. 14, Murray said that he planned to retire at some point in 2019 — and that it was possible that Grand Slam tournament might be the final event of his career.
He is most famous for ending Britain’s 77-year wait for a male champion at Wimbledon in 2013; he also won the 2016 title there, along with the 2012 U.S. Open and two Olympic singles gold medals and a Davis Cup, while reaching No. 1 in the rankings.
Tuesday’s post included two pictures — one of Murray in a hospital bed, the other of an X-ray.
“I now have a metal hip as you can see,” Murray wrote, before showing that his sense of humor is intact by adding, “and I look like I’ve got a bit of a gut.”
He has dealt with hip pain for years and already had one operation in January 2018. But that did not solve the problem.
The night he lost to Roberto Bautista Agut in Australia, Murray said he would decide quickly whether to have surgery again.
“I have an option to have another operation, which is a little bit more kind of severe than what I’ve had before — having my hip resurfaced, which will allow me to have a better quality of life and be out of pain. That’s something that I’m seriously considering right now,” he said at the time. “Some athletes have had that and have gone back to competing. But there’s obviously no guarantees with that. The reason for having an operation like that is not to return to professional sports, you know, it’s just for a better quality of life.”
Murray had been keeping in touch with American doubles player Bob Bryan, who had the same hip resurfacing with a metal implant last August.
By December, Bryan was back at practice. And he made his Grand Slam return at the Australian Open.
“He’s been watching me like a hawk, asking me how I’m feeling after matches, after practices, where I’m at. He’s just trying to gauge how long it would take him, if this procedure is an option,” Bryan said about Murray. “I’m just trying to be supportive. I never once told him, ‘This is the way to go,’ because I do see that singles is a different monster. Those guys are really sliding around, killing themselves for four hours. Who knows if this joint would hold up?”
___
More AP Tennis: https://www.apnews.com/apf-Tennis and https://twitter.com/AP_Sports

‘Bromance’ of Brady and Edelman key to New England’s…