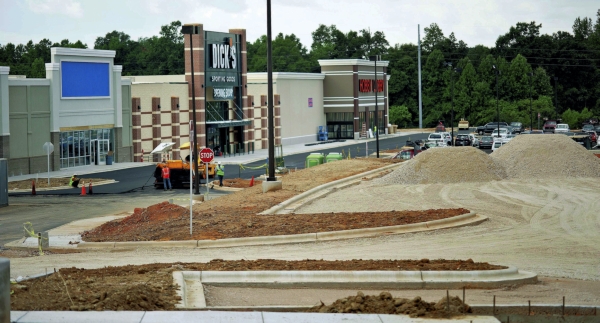 SALISBURY — Shifting away from prior plans, developers of a shopping complex on Julian Road say they’ll market adjacent land to industrial businesses.

The existing shopping complex on Julian Road, in the Summit Corporate Center, opened in 2015 and includes Hobby Lobby, Dick’s Sporting Goods, Kirkland’s, Salsarita’s Fresh Mexican Grill and other stores. There are also multiple empty lots in the shopping complex on which buildings have been proposed. Those locations, however, haven’t drawn enough interest for stores to move in.

Developers Rowan Summit LLC, with a principal office in Chattanooga, Tennessee, initially planned to fill the existing site with stores and continue to a Phase 2 on an adjacent tract. On Monday, however, the developer received approval from the Rowan County Planning Board to reorganize lots on land that’s already cleared and market about 18 acres of undeveloped property — Phase 2 — to industrial businesses.

By shifting its target, Rowan Summit said the land would fit with a majority of what’s already in the Summit Corporate Center, including Agility Fuel Solutions, IMS Fabrication and Infiltrator Water Technologies, among others.

The Phase 2 land has almost 493 feet of frontage along East Ritchie Road, where Koontz Elementary School is, and would be adjacent to Interstate 85.

Rowan County Economic Development Commission President and CEO Rod Crider said the change will be helpful because Summit Corporate Center has limited land left for use by industrial prospects.

“Summit still remains a real popular spot because of its access to the interstate and amenities,” Crider said.

While zoning changes were passed unanimously on Monday, board member Jonathan Chamberlain asked about the image an industrial site on I-85 would portray to visitors. Chamberlain, chief officer of college environment at Rowan-Cabarrus Community College, said the school has worked hard to make its facilities visible from I-85 attractive.

An industrial business would “present a very different impression of Salisbury,” he said.

Stewart responded that there are appearance-related covenants at Summit Corporate Center that would apply to industrial businesses similar to standards for the appearance of a retail business in the development. The covenants, for example, require masonry as the dominant facade for all buildings.