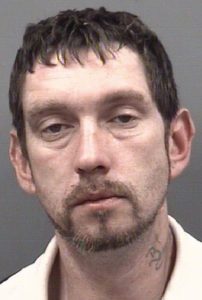 LANDIS — A China Grove man was charged late Thursday after a woman reported a suspicious person on her front porch.

The man appeared impaired and had crashed his car in her front yard.

A Landis police officer responded to the home in the 900 block of South Zion Street, and a Rowan County Sheriff’s Office deputy went to assist. When the officers arrived, they noted tire tracks leaving the roadway and a Honda Accord in the yard.

Carpenter got down on his knees, and the officers placed him in handcuffs.

The officers found a zippered pouch that contained a plastic bag with a tan powder, a Q-tip, a pocketknife, and a medical tourniquet. The bag fell from Carpenter’s right coat pocket, authorities said.

Carpenter gave the officers several stories about what caused the crash.

A trooper with the N.C. Highway Patrol arrived to investigate the crash. The trooper gave Carpenter a sobriety test and determined he was impaired. He was subsequently charged with driving while impaired.

Carpenter was taken to Novant Health Rowan Medical Center, where a blood test was performed to confirm impairment. According to the report, Carpenter told the trooper that he had used heroin earlier in the day.

The substance found at the crash scene tested positive for heroin.

Carpenter remains in the Rowan County Detention Center under a $45,000 secured bond.

Rowan weather: A little of everything this week