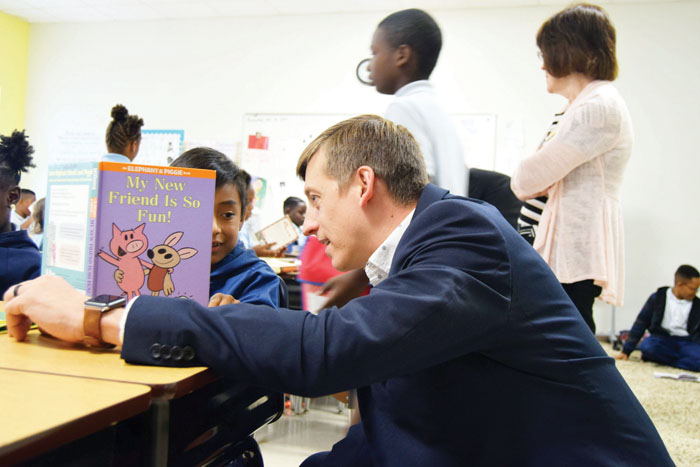 This year, the Rowan-Salisbury School Board’s plate of work is filled with what’s surely to be the most difficult and important work in decades for our community’s public schools.

Taken together, elected school board members and staff this year will craft a plan to fundamentally reshape the system’s physical footprint and academic quality.

Of late, closing and consolidating schools — North Rowan High in particular — has attracted the most attention. There’s also redistricting and renewal, Rowan-Salisbury’s first-of-its-kind ability to operate the entire system with charter-like flexibility.

After this week, one sure bet is that a decision to close North Rowan High School won’t be one of the tough choices school board members finalize in 2019.

The school board voted Thursday to delay conversations about closure until countywide redistricting plans wrap up. Plans presented last year had pegged the closure to occur within five years. Now, the school board will re-evaluate closure after new districts have been in effect long enough for an informed decision to be made, reporter Andie Foley wrote Thursday (“School board hits pause on proposal to close North High”).

And, while we don’t envy the school board’s position, we think the Rowan-Salisbury School Board made the right call to hold off on North Rowan’s closure and to finalize redistricting before shuttering a school that serves hundreds in the Spencer and East Spencer areas.

A presentation this week showed that North Rowan is falling short of its capacity by hundreds of students, but that could be mitigated through redistricting. In what’s surely to be a thorny conversation, some students could be moved from growing schools to ones that are currently shrinking in total students, such as North Rowan. But if there’s a way to prevent the closure of a community’s school and do it sustainability, the school board should take time to thoroughly examine all options.

A recent decline in North Rowan High’s population, however, is a sign that solutions cannot be narrowed to redistricting, perhaps making it beneficial that planning for renewal is also on this year’s agenda.

During the 2016-2017 school year at North Rowan, final, average daily membership was 598, according to data available online through the Department of Public Instruction. It was 593 in 2017-2018. The latest data indicate the same number is about 540 so far this year.

Complicating matters further, the Rowan-Salisbury School System’s overall number of students is declining. Data available through the Department of Public Instruction show final, average daily membership of RSS at 20,643 10 years ago. In the 2017-2018 school year, the same number was 18,924. The limited data available for the current school year indicate a small but continued decline.

The kind of economic growth elected and business leaders hope to see could change attendance declines. That growth, however, must include young families with school-age children because, while the number of live births in Rowan County has fluctuated, it’s lower than 18 years ago. The number of live births, according to online data from the North Carolina State Center for Health Statistics, was 1,705 in 2000, 1,830 in 2008, 1,582 in 2012, 1,650 in 2016 and 1,588 in 2017 — the most recent available.

The Rowan-Salisbury School System is in a difficult position. The county is at the precipice of seeing growth from Charlotte finally inch over its borders. Like Rowan County’s population, however, students are not evenly spread across the county. Growth will not be evenly spread either.

In 2019, the Rowan-Salisbury School System will be planning for a future that simultaneously appears bright and uncertain.

Editor’s note: This article was updated at 9:44 a.m. Jan 27 to remove two sentences referencing the Essie Mae Kiser Foxx Charter School. The school does not have plans to enroll high school students.