An Irish destination: The Shamrock Shoppe reopens at bigger location 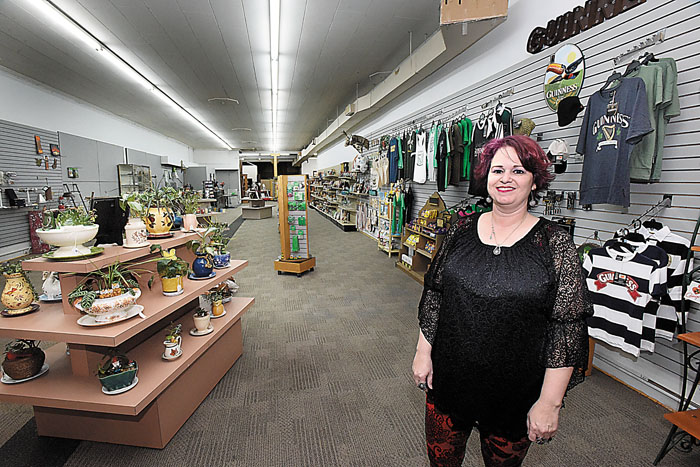 Shamrock Shoppe owner Dana Doutt stands in front of her selection of Irish products with a look down the long store show area. . photo by Wayne Hinshaw, for the Salisbury Post

After years of working as a pharmacy technician, Doutt saw the need and had the desire to open up The Shamrock Shoppe, an Irish-themed shop in downtown Salisbury.

On Saturday, Doutt opened her new location on 115 W. Innes St. after outgrowing the building at 114 S. Main.

Doutt said the new location will allow her to offer more Irish products and expand the antiques and consignment aspect of The Shamrock Shoppe.

“We grew fast, so we needed more space,” Doutt said. “I had new vendors that wanted to come in and I didn’t have anywhere to put them because we already were at capacity. With the consignment piece, I had more and more consigners coming in and the shelves and the racks were full.”

With more space, Doutt will be able to cater more to her customers and make them feel welcome, she said. The Shamrock Shoppe will have an expanded record selection with headphones and a record player so customers can listen to music; a book section with chairs for them to read; and an area for kids to play while their parents browse the store.

“We want it to be really welcoming,” Doutt said. “You feel like this is someone that wants you to come in and shop and cares, not just come in and get your stuff and then get out.”

Doutt has a “request book” in which she collects products people ask for. She’s expanded a firefighter section and special-order T-shirts, and she attempted to track down a type of chips a girl from England asked her to find.

Doutt said she hopes the shop will be a destination, similar to what Salisbury was when she was a child. Growing up in Mooresville, Doutt came to Salisbury with her mom to go antique shopping.

“I can remember coming to do that as a kid,” she said. “It’s almost like returning to that childhood thing but being a part of it.”

Doutt said she has working relationships with her neighbors, Priscilla’s and Maison Monroe. Having them nearby will offer a great antique selection all on West Innes, she said.

Doutt is a first-time business owner. She initially looked into renting a booth to sell items she has collected at estate sales, but after seeing the price, she decided to open her own store.

Doutt said she enjoys the independence of being a small business owner because she is able to make the store her own with her own schedule and choice of vendors.