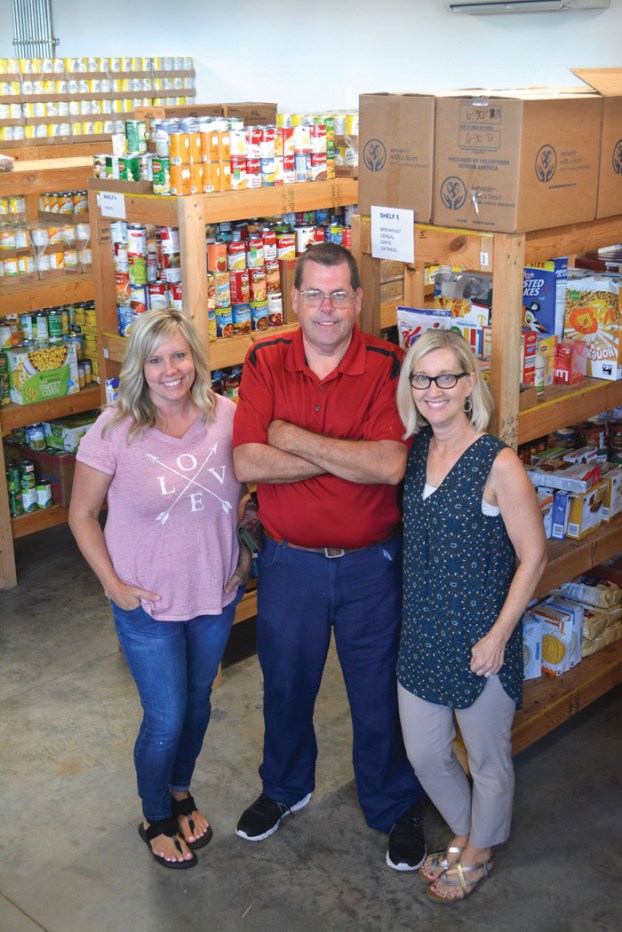 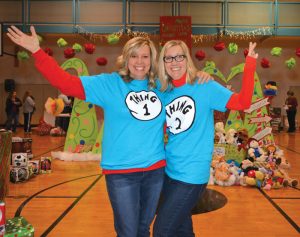 Hope and Anne at a Christmas With Dignity event, which is now called Christmas at the Market.

“To everything there is a season, and a time for every purpose under heaven.”
Anne Corriher used this verse from Ecclesiastes to begin a recent letter she wrote to supporters of Main Street Marketplace and Meeting Place. For nearly 12½ years, Corriher has led the non-profit organization in downtown China Grove. Now, she says, she’s entering a new season in her life, and stepped away from her position as executive director at the end of 2018. Corriher will, however, continue to volunteer there, and is now a member of the board of directors.
“It’s a perfect time for me to make this transition,” says Corriher, 58. “The capital campaign is complete, and we moved into our new building in July. We have wonderful volunteers who are dedicated and efficient.” 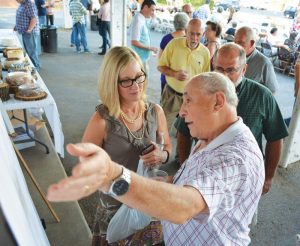 Anne talks with supporters at a community dinner held in the parking lot in September 2016.

They, too, have adjusted to the new space, and a new way of doing things at the market. Instead of simply handing neighbors a bag of groceries, the volunteers assist neighbors who are shopping at the market. Neighbors are given a certain number of points based on family size, and items are purchased with those points. Healthier choices have lower points. The new system brings with it a new dignity to shoppers, and provides them with choices, Corriher says, to get what they want or need.
Alyssa Smith, executive director of Healthy Rowan, helped Main Street Marketplace set up the new system.
“We do include healthy options to encourage and educate our neighbors,” Corriher says. “Alyssa assisted us in a big way to help us create placement of all of the items, and trained our volunteers. It’s a huge partnership, and it was an empowering portion of our new model.”
Over the years, Main Street Marketplace and Meeting Place — originally known as Main Street Mission — has evolved from the traditional model of simply offering assistance to offering programs that help people work their way out of poverty.
Bridge Builders trains middle-class volunteers who want to see poverty from a different perspective, and who want to serve as mentors to neighbors who are also going through training. The Getting Ahead class has had 50 graduates over the past 4½ years, with the 10th class having started earlier this month.
The evolution of the mission has been a successful one, Corriher says. “We always just assumed what we thought people needed — we never asked. When we brought everyone to the table in community meetings and conversations, we were shocked. Unless I hear someone’s story, I don’t have a clue about what they are going through. When you understand what they need and what their family needs, it’s totally different than what you assume. It’s changed me more than anybody through these last five years. I feel so fortunate to have had this experience, and through this experience, my life has been transformed.”
Of course, this new model is much more time intensive and labor intensive, for the staff, the volunteers, and the neighbors, Corriher admits. “I could see clearly I needed to make a change. I struggled to figure out how to make this work part-time.”
But she knew that wasn’t the right choice for her, and the timing is right for her on a personal level as well.
Corriher’s mom, Becky Drye, turns 85 this month.
“She is an amazing woman,” Corriher says of her next-door neighbor. “She still takes care of us in many ways, but I want to spend more time with her.”
And she and her husband of 35 years, Clark, will become first-time grandparents in March. Their son James and his wife Courtney married in the back yard in 2017, and now live in Charlotte. Daughter Mindy works for American University in Washington, D.C.
“He’s been my rock,” Corriher says of her husband. “He’s very steady, and he’s taken a second seat for so long.”
He also encouraged her to take the job. Longtime board member Tom Brooke had approached her about the position, she says, “and it scared the life out of me.”
But she and Clark prayed about it, and he told her, “Honey, just try it for six months. If you don’t like it, don’t stay.”
“Twelve years later,” Corriher says, “I guess it was a good fit.”
Corriher adds that the agency wouldn’t be where it is today without Brooke.
Hope Oliphant, the agency’s longtime program director, is the new executive director.
The two met on a mission trip to Honduras, Corriher says, and clicked. “We were drawn to one another because we shared a compassion for those neighbors on hard times.”
Oliphant joined the staff in 2014, and rolled out the Bridge Builders initiative.
Of her new role, Corriher says, “She brings lots of enthusiasm and passion, and she brings a willingness to try new things. She’s absolutely fearless, and she’s a huge visionary. I have no reservations.”
Neither does Tom Smith, who served as lead donor for the recent capital campaign.
“I have been totally impressed with Anne and the enthusiasm and passion that she has,” Smith says. “I asked Anne what they were doing to get people out of poverty, to get back on their feet and back to the workplace. Their programs are what inspired me to help. She should be proud of what she’s built. I’m very happy she’s going to stay on the board and keep watch on Main Street Marketplace and Meeting Place.”
As always, Corriher deflects any kudos, heaping praise on her co-workers, who also include Jeff Hubbard, operations manager, and Madison Ellenburg, who joined the staff in August as marketing director. Michelle Gray is the new director of business development, and will also assist Oliphant in programming.
Corriher also has praise for Fred Corriher, who helped with fundraising for the capital campaign, and Steve and Paul Fisher, with whom she also worked closely in that effort.
“Anne is a beacon of light in the darkness for many of our neighbors in southern Rowan County,” says Steve Fisher, CEO of F&M Bank. “She has created something beautiful in Main Street Marketplace and Meeting Place. It is a sustainable organization founded in Anne’s image of faith, compassion, perseverance, independence, and love. It is that foundation that F&M Bank invested in and continues to partner with today. It is fitting that Hope will carry those cornerstones into the future, both literally and figuratively.”
Brooke joined the board of Main Street Mission soon after its organization. He’d been with Corriher on a mission trip, and found she had a good heart and was organized, he says. “I knew she had a giving spirit, and thought she’d be a perfect fit. I’m proud of her for leaving at a time when everything is going so well. I was by there the other day, and there’s already a different spirit there — which is fine.”

Answers to your questions about the park

Even though Hurley Park is a park, we consistently get questions from the public about hours, plant information, and how... read more