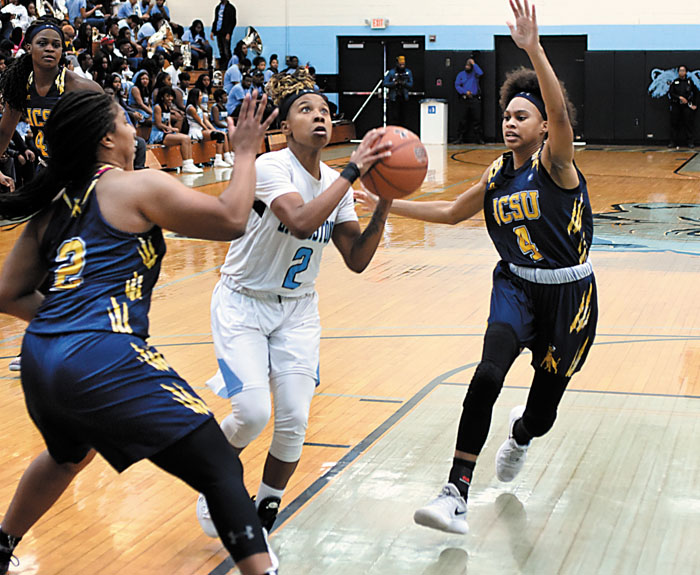 Livingstone didn’t play like a team that had lost 12 in a row here Saturday afternoon at New Trent Gym.

The Blue Bears made sure No. 13 did not happen, as they outplayed rival Johnson C. Smith and won, 76-57, in CIAA women’s basketball action.

Livingstone, which had not won since Nov. 21, finally got its first victory of 2019, improving to 4-15 overall and 1-8 in conference play. The Blue Bears had come very close in their last game on Wednesday, falling to Fayetteville State, 71-68, on a 3-pointer with four seconds left.

When Darra Walker drained a 3-pointer with 7:23 remaining in the contest, Livingstone had its largest lead of the contest at 74-45 — 29 points.

During the final six minutes, mostly against Livingstone’s subs, the Golden Bulls did cut into their deficit somewhat, pulling to within 17 points (74-57) on a free throw from Teana Lewis with 29 seconds left.

Guard Daisa Harris once again led Livingstone, scoring 21 points (20 in the first half) on 7-of-15 shooting, before fouling out with two minutes left. She was also 6-of-11 from the foul line and grabbed six rebounds.

Walker enjoyed her second straight solid game, making 5-of-9 from 3-point range and scoring 15 points. She had 22 points in Wednesday’s loss to Fayetteville State.

Livingstone shot the basketball better than it had during most of the losing streak games. On Saturday, the Blue Bears made 46 percent of its field goal attempts (27-of-59) and 43 percent from beyond the 3-point arc (9-for-21).

The Blue Bears made 5-of-9 from 3-point range during the second half, when they were pulling away.

Livingstone also scored 27 points in the paint, and 21 off of the Bulls’ 18 turnovers.

NOTES: The Blue Bears have away games this week, at Shaw on Monday night (6:00) and at Winston-Salem State on Saturday (2 p.m.).