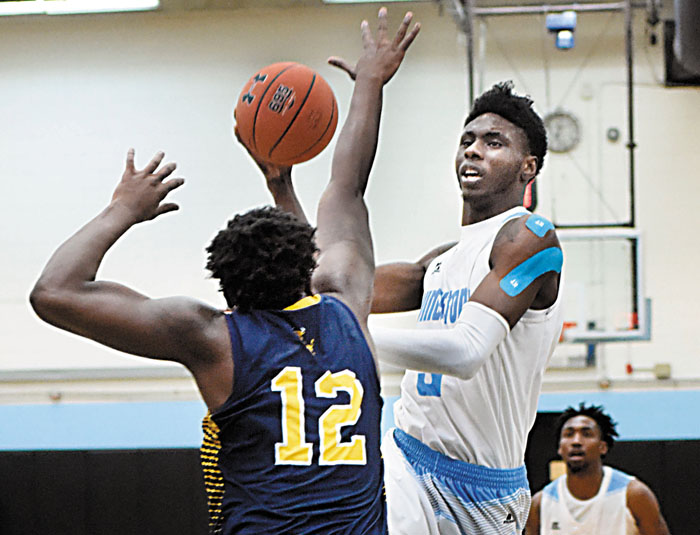 Wayne Hinshaw/for the Salisbury Post ... Livingstone post player Lydell Elmore (5) goes to the basketball against J.C. Smith’s Anthony Harper (12). Elmore had a double-double on Saturday with 17 points and 10 rebounds.

The victory was the Blue Bears’ fifth straight, moving their overall record to 12-6 and conference mark to 5-4. Coach James Stinson’s team leads the CIAA’s Southern Division.

Stinson was just happy to get the win, going against J.C. Smith and its long-time coach Steve Joyner Sr.

“Against Smith, you can throw out the records,” said Stinson. “You’re going against a coaching legend, so it’s almost always going to be a tight game.”

After a back-and-forth first 13 minutes, Livingstone took a 27-26 lead on Damante McNeill’s layup with 6:27 left in the first half. The Blue Bears led by as much as an eight points before settling for a 40-36 halftime advantage.

The Bulls bounced back in the second half and Quincy Nolan’s layup at the 15:37-mark gave the visitors their biggest lead at 49-43.

But behind McNeill, Lydell Elmore and star guard Roger Ray, the Blue Bears begin to take control again. Livingstone also got key buckets from Kenny Grant, and free throws from Malik Smith put the Blue Bears up by 10 points (69-59) with 6:07 remaining.

JCSU again refused to go away, trimming its deficit to five points (75-70) with Roddric Ross’s 3-pointer with 3:11 left to play.

“We couldn’t shake them,” explained Stinson. “And Ross (28 points) is as good as advertised.”

From there, a tip-in and free throw from Austin Harris, free throws from Ray and a dunk from Smith built the Livingstone lead back up to 82-71, with 1:50 on the clock.

Down the stretch, Ray added a free throw and assisted on Navar Elmore’s fastbreak, exclamation-mark dunk with 47 seconds left.

Ray, a junior guard, continued his great play of late with 21 points, including making 7-of-8 at the foul line. He dished out 10 assists, adding to his career school record that he set on Wednesday night against Fayetteville State.

Also, during his recent hot streak, Ray went over 1,000 points scored in his career — last Saturday, in the win over Claflin.

Lydell Elmore produced a double-double for Livingstone yesterday, with 17 points and 10 rebounds. He was 8-for-14 from the field.

“Lydell showed what he’s capable of doing on a consistent basis,” said Stinson. “He was aggressive in going to the basket. And with Grant’s big body (6-8, 265) down low, it frees up Lydell and his brother (Navar) to not be blocked out and to rebound better.”

Harris added 12 points and McNeill 11, respectively, for the Blue Bears.

Harris was a member of Livingstone’s CIAA champions in 2015 and has returned after a few years away from the game.

“It’s good to have Harris back,” said Stinson. “He’s playing with a lot of maturity and he’s kind of our rock defensively.”

Ross had a monster game for the Bulls, hitting 5-of-9 attempts from the 3-point arc, on his way to a game-high 28 points. He also grabbed nine rebounds.

Livingstone continues to shoot well, knocking down 49 percent of its field goal attempts (28-of-57). The Blue Bears were outstanding at the foul line as well, sinking 25-of-33 (76 percent).