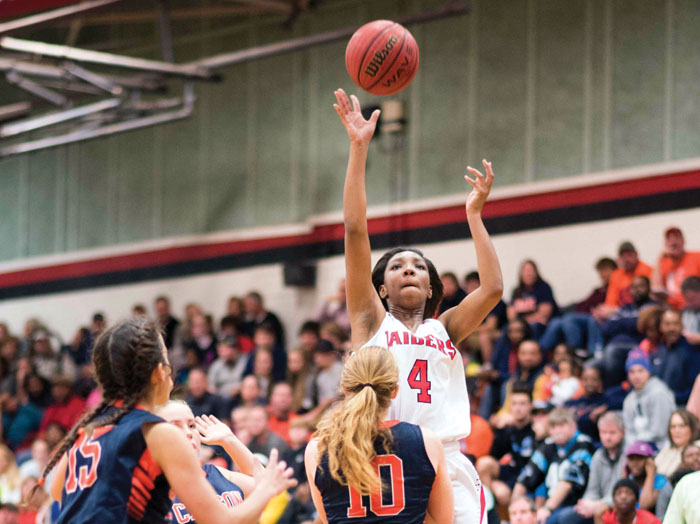 “It was a quiet 52,” South coach Stacy Ellis said. “Before I saw the book, I thought she probably scored in the high 30s. She missed more free throws tonight (nine) than she had  in a game  all season.”

Not that Ellis is complaining. Downs is having a monster season.

The 5-foot-11 Catawba signee broke her own school record of 44, set earlier this season, and also topped the modern Rowan County girls’ record set by Salisbury’s Shayla Fields, who poured in 47 in a romp against Central Davidson as a senior during the 2004-05 season.

While Fields, who went on to do very well at N.C. State, exploded in a breezy 94-45 win for the Hornets, South needed everything Downs could offer to beat the Black Knights.

Downs scored 19 points in the first quarter and Madison McGuire made a 3-pointer as the Raiders took a 22-14 lead.

Freshman Bethany Rymer, who scored 11 points, made three field goals for the Raiders in the third quarter, and South took a 56-44 lead to the fourth.

Downs carried the Raiders in the homestretch. She scored 17 of South’s 20 in the fourth quarter. That was enough to hold off the Knights, who got eight 3-pointers and 29 points from Davis and 25 points from Hege.

“That was a big part of the game plan — to limit McMillan,” Ellis said. “That’s why we started both of our bigs (Lauren Shell and Jaleah Butler).”

Downs finished with three 3-pointers (all in the first quarter) and 14 2-point field goals and went 15-for-24 from the foul line. She also had 17 rebounds and 10 steals for a triple-double and three assists.

“Records are nice, but on top of everything, we got the win,” Downs said.

Downs is averaging 31.2 points per game, a county-record pace. Fields averaged 27.8 as a senior.

South also won at North Davidson earlier this season, taking a 69-68 overtime win in Welcome. Downs scored 32 in that one, while Rymer had a career-best 22, and McGuire scored 12.