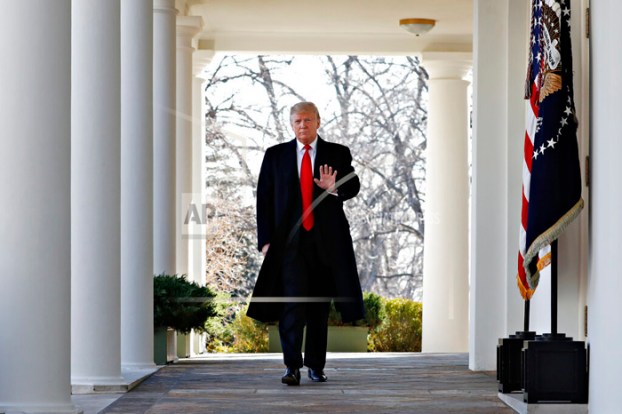 President Donald Trump walks through the Colonnade from the Oval Office to speak in the White House Rose Garden on Friday. Jacquelyn Martin/Associated Press

Donald Trump is an unconventional Republican in many ways. But in one particular area — immigration — he has trashed a long record of benevolent tolerance embraced by the last three Republican presidents.

Trump has always made unvarnished and unfounded attacks on illegal immigrants a major part of his political appeal. And as federal District Judge Edward Chen wrote last October, the president displays a special “animus against nonwhite, non-European immigrants.”

As part of his nativist fear-mongering, Trump has tried to cancel two programs that protect more than 1 million undocumented foreigners from deportation.

One group of about 700,000, known as Dreamers, were brought here as children and are well-known for their high-spirited campaign to remain in this country. In public opinion polls, about 4 out of 5 Americans support their efforts.

The others, more than 400,000 strong, are here under a little-known program called Temporary Protected Status (TPS), which provides sanctuary for exiles fleeing natural disasters or political upheavals in 10 different countries. They don’t have a catchy nickname like the Dreamers, and few Americans know anything about them. But they should.

Trump reached new heights of cynicism by offering to shield the Dreamers and the TPSers from deportation for three years as part of a deal to fund his border wall and reopen the government. But these foreigners would be in no danger of removal if Trump himself weren’t threatening to cancel their protected status, a threat that has been blocked for now by federal judges. And he offered only short-term, not permanent, relief.

Democrats rightly rejected the offer, but Trump’s anti-immigrant “animus” also departs from recent Republican values. It was Ronald Reagan who signed a bipartisan bill in 1986 that legalized about 3.2 million undocumented immigrants. It was George H.W. Bush who signed legislation in 1990 that created the TPS program.

And it was George W. Bush who extended the program several times and added protection for 150,000 Salvadorans after earthquakes devastated their country in 2001. An immigrant rights activist praised Bush for keeping his campaign promises “about treating immigrants from other countries fairly and respectfully.”

Today Trump is doing exactly the opposite, treating immigrants unfairly and disrespectfully, including those who have enjoyed protection under TPS. True, the program includes “temporary” in its name, but from a practical and moral perspective, many of these families have built lives as hardworking, tax-paying, law-abiding contributors to their communities and deserve to stay.

Moreover, these undocumented adults have about 275,000 children who were born here and are American citizens, according to an estimate by the Center for Migration Studies. Judge Chen, who blocked the deportation of about 300,000 TPSers from four countries with his injunction last year, wrote:

“TPS beneficiaries thus risk being uprooted from their homes, jobs, careers and communities. They face removal to countries to which their children and family members may have little or no ties and which may not be safe. Those with U.S.-citizen children will be confronted with the dilemma of either bringing their children with them, giving up their children’s lives in the United States (for many, the only lives they know), or being separated from their children.”

The case for keeping the TPSers is economic as well as moral. Chen favorably cited a brief from 17 states, which argued that the departure of those foreign-born workers would cost $132 billion in lost economic productivity, $5.2 billion in unpaid Social Security and Medicare contributions, and $733 million in turnover expenses.

Even more seriously, TPSers regularly send money back to their home countries, providing a vital source of economic stability. In El Salvador alone, according to the World Bank, these U.S.-based immigrants remitted $4.6 billion in 2016, accounting for 17 percent of that country’s entire economy. If they leave and stop those remittance payments, they could undermine their economies back home and create even more incentives for desperate immigrants to leave for the U.S.

But the final argument in favor of continuing TPS — and opposing Trump’s xenophobic tantrums — comes from 11-year-old Ronyde Christina Ponthieux, an American citizen who worries that her parents will be sent back to Haiti.

Cokie’s latest book, “Capital Dames” (HarperCollins), has recently been published in paperback. Steve and Cokie Roberts can be contacted at stevecokie@gmail.com.

Quotes of the Week: ‘Make the most of every day’

“Live day to day. Make the most of every day. You get no guarantees. None of us do.” Sue Carroll,... read more