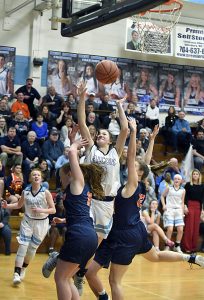 West Rowan’s Mary Sobataka (3) shoots the layup that gave her 1,000 career points. … Photo by Wayne Hinshaw, for the Salisbury Post

A week after suffering their first loss, the Cougars checked their mirrors, made a lane change and raced past host West Rowan, 70-53, in North Piedmont Conference action here Friday night.

“Every conference game is big,” coach Brooke Stouder. “And every road win is a good win. There are still some things we’ve got to get better at, but I’m very proud of our effort tonight.”

That on-court fortitude left Carson (17-1, 3-1) in a three-way tie for first place in the league standings with six games to play. The Cougars placed three scorers in double figures and used a 10-2 run that bridged the second and third quarters to break open a tight-fisted duel. West (14-3, 2-2) dropped a game off the pace with a dismal shooting performance, but celebrated when Mary Sobataka scored her 1,000th career point in the closing seconds.

“It was a great bounce-back win,” said McKenzie Gadson, the Carson senior who shot 8-for-11 from the field and topped all scorers with 17 points. “Feels like we’re back on track. We just have to keep taking them one at a time.”

Sobataka received the biggest cheers when she scored her 10th and final point on a driving layup with 11.1 seconds to go. It capped a 4-for-24 shooting night, unusual for the senior guard.

“It’s definitely a relief,” Sobataka said. “It’s something that was going to happen eventually and it happened this game. I spent most of it rushing my shot. There were some that felt like they were going in, but didn’t. I just never got into any type of flow.”

Neither did her teammates. West fell behind, 31-21, at halftime, then turned the ball over six times within three minutes as the second half unspooled. Carson dominated the third quarter and led by as much as 54-30 when reserve Maci Cooper drove for a layup early in the final period.

“I thought we were still in the game at halftime,” said Falcons’ coach Ashley Poole. “We talked about coming back out and fighting them on defense, not giving them open shots and making it hard. But once they got ahead by 20, our focus was on getting Mary to 1,000. I told her she was going to get it tonight and to just keep shooting.”

The game turned Carson’s way in the closing minutes of the first half. The Cougars were clinging to a 20-17 lead when Cooper — a 5-foot-1 junior who contributes 7.0 points-per-game — banked in a 3-pointer from the right side with 1:20 remaining before the break.

“It’s the first time I’ve ever banked a shot in a game,” she said with a post-game giggle. “Kenzie kicked it out to me. I knew the shot was off (target) the second I let it go, but the bank was open.”

Following a 3-pointer by teammate Ellie Wilhelm, Cooper banked in another basket with two seconds to go in the half. Her leaner from the right side gave Carson a 10-point halftime advantage.

“It all happened in the last two minutes,” said Stouder. “We were so active. I remember it felt really good that we had held them to 21 points in the first half.”

Gadson’s three-point play pushed Carson’s lead to 40-26 midway through the third stanza before Cooper and Taylor Conrad drained 3-balls that made it 48-28.

Sobataka, who’d been held scoreless for three quarters, found her groove in the fourth. Her first points came on an authoritative dribble-drive with just over six minutes to go. Then came a 3-pointer from the right side. Her total rose to 998 with another long ball — this one from right corner with 43 seconds to go. And finally, in the waning seconds, a power layup through the lane for 1,000.

“I’m glad she did it,” Poole said of Sobataka, who has signed to play Division I softball at Coastal Carolina. “She’s a hard worker who gives me 32 minutes every game.”

NOTES: Cooper shot 5-for-5 from the field and finished with 13 points. Teammate Carleigh Perry had 11 rebounds before suffering an ankle injury with 1:14 remaining. … Junior Abigail Wilson led West with 16 points and eight rebounds. Gabby Blabon had six assists and Whitley Arnott pulled down 14 rebounds.