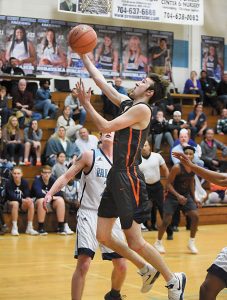 MOUNT ULLA — It was another step in the right direction for the embryonic Carson boys basketball team.

The visiting Cougars put a week-old disheartening loss behind them, overcame West Rowan’s jackrabbit start and rallied for a 67-60 North Piedmont Conference victory on Friday.

“This is never an easy place to play,” coach Brian Perry said, after Carson (8-9, 3-1) won for the fifth time in its last six games. “I thought for us to bounce back and get this win shows a little bit of growth on our part. We got down early, didn’t give in and fought all the way back.”

Carson erased an early, double-digit deficit and pulled within 28-27 at halftime. It surged ahead in the third quarter when Mark Spry buried a 3-pointer from the right corner and sophomore A.J. Mauldin drove for a layup. Mauldin scored 12 of his game-high 18 points in the third period, including a 3-ball that provided a 45-41 lead with eight minutes to play.

“I felt confident when I touched the ball,” he said. “I found a little space but most of the time, I was pretty deep in the corners. When I see that, I feel like I have the ability to make shots.”

It was still a five-point game when Carson’s E.J. Clark navigated the left baseline for a layup with 1:52 remaining. Teammate Javon Smith added a dribble-drive layup from the left side for a 63-54 Carson lead with 1:20 to go.

“Coach told me to be strong when I get double-teamed like that,” said Smith, a sophomore guard who netted 12 points. “Once my man fell on the ground, I saw a chance to go to the rim and score.”

West coach Mike Gurley identified two junctions when the game’s momentum seemed to turn. The first came with 6:59 remaining and Falcons down 47-41, when senior guard Layton Butler crashed to the floor with a back injury. He left the game with 12 points.

“He might have had only 12 points, but he’s a stat-sheet stuffer,” Gurley said. “If you write down the Rick Pitino stat of tipped balls and the blue-collar stat of rebounds — and combine it with the energy he was giving our team — he’s the one who was making the rest of us play hard. I thought he was going to be instrumental down the stretch. It was there for the taking.”

Gurley’s other turning point came midway through the final quarter. West (2-15, 0-4) had a chance to slice into a 52-48 deficit but turned the ball over under its own basket. Carson answered with another Spry 3-ball and Smith’s steal/fastbreak layup combo to stretch its lead to nine.

“I thought our guys responded to some adversity,” Perry said, after the Cougars won their first road game. “They maintained their composure after West’s great start, kept on grinding and worked their way back into the game. That’s what I liked the most.”

The Falcons were paced by senior Bryson Moss, who scored 15 of his season-high 17 points in the frantic fourth quarter. His three-point play drew the hosts to within 57-52 with 2:50 to play.

“Our coaches are always talking about adversity,” Smith said. “They tell us we’re athletes — and athletes handle adversity.”

Even West, losers of three straight and winless in seven home games, did that.

“I love coaching this group,” Gurley said. “They cashed in 32 minutes of playing hard tonight. It didn’t work out our way. But this group, they’ll never quit.”