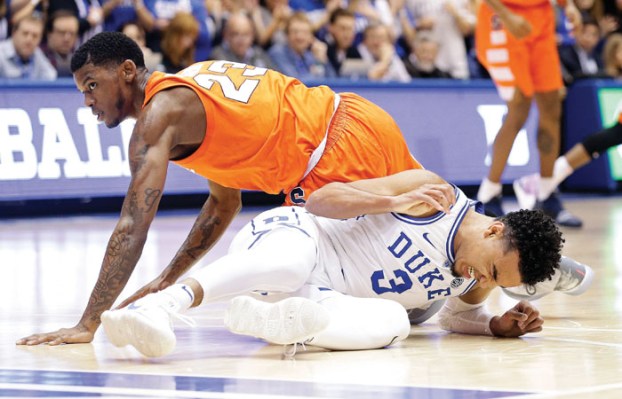 Duke's Tre Jones (3) grimaces after colliding with Syracuse's Frank Howard (23) during the first half of an NCAA college basketball game in Durham, N.C., Monday, Jan. 14, 2019. Jones was injured on the play and left the court. (AP Photo/Gerry Broome)

Tre Jones probable to play for No. 2 Duke against Ga Tech

DURHAM (AP) — Point guard Tre Jones has been upgraded to probable for No. 2 Duke’s game against Georgia Tech after missing two games with a right shoulder injury.
Coach Mike Krzyzewski on Friday updated Jones’ status for Saturday’s game, saying he “has really progressed well.”
Jones had been out indefinitely since separating his AC joint in a collision with Syracuse’s Frank Howard early in an overtime loss to the Orange on Jan. 14. In that kind of injury, the collar bone separates from the shoulder blade.
While Krzyzewski initially worried his point guard would be out “for a while,” further testing indicated the injury was not as severe as feared.
Jones’ on-the-ball pressure has been a major reason for the Blue Devils’ play on defense . He has had five games with three steals apiece, and six in a victory over Texas Tech.
Duke went 2-0 without him, beating then-No. 2 Virginia at home and Pittsburgh on the road, but averaged just seven steals and 10.5 assists in those games. The Blue Devils average 17.5 assists and a league-best 10.4 steals.
He also leads the Atlantic Coast Conference in both assists and assist-to-turnover ratio, with both numbers at 5.69.
___
More AP college basketball: https://apnews.com/Collegebasketball and https://twitter.com/AP_Top25