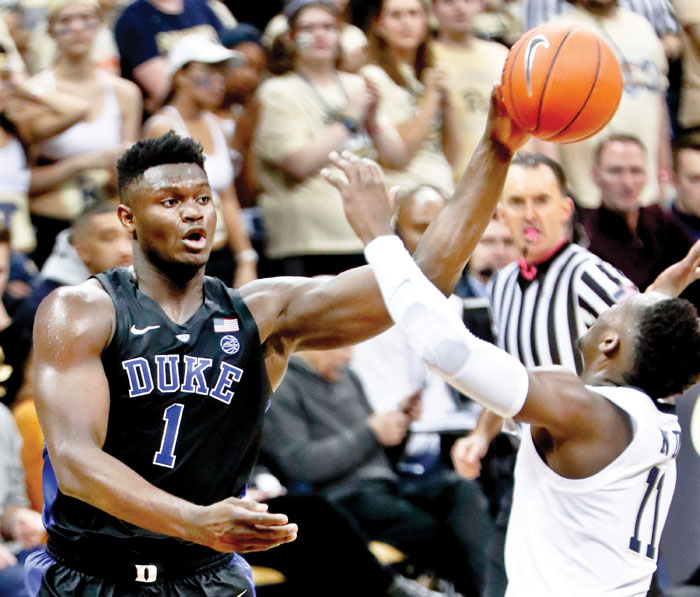 By JOEDY McCREARY, AP Sports Writer
RALEIGH (AP) — A look at the upcoming week around the Atlantic Coast Conference:
GAME OF THE WEEKEND
Syracuse at No. 10 Virginia Tech. In the weekend’s only matchup of teams above .500 in ACC play, the Orange — who entered Thursday night’s game against Miami at 13-5 overall and 4-1 in the league — look to beat another top-10 team on its home court after they stunned then-No. 1 Duke in overtime last week. The Hokies (15-3, 4-2) will have had five days to dwell on their 103-82 loss at No. 11 North Carolina that marked their second loss in three games.
LOOKING AHEAD
A pivotal Top 25 matchup of contrasting styles looms when No. 3 Virginia visits No. 21 North Carolina State on Tuesday night. The Cavaliers are ranked first overall in Ken Pomeroy’s efficiency rankings with their Pack Line defense ranking second in that metric and allowing an ACC-best 52.4 points per game. Meanwhile, the Wolfpack and their uptempo, pressure-based system lead the conference with an average turnover margin of plus-4.28.
PLAYER TO WATCH
John Mooney continues to put up big rebounding numbers for a Notre Dame team that has struggled in conference play. Mooney averages 10.8 boards — the only ACC player averaging double figures on the glass — and no one in the league has more than his 23 offensive rebounds in ACC play. It helps that he’s getting plenty of chances on the offensive glass — the Fighting Irish rank last in the league, shooting 41 percent.
INSIDE THE NUMBERS
The Duke freshman tandem of RJ Barrett and Zion Williamson has been historically dominant. Barrett has reached the 20-point mark 15 times while Williamson has done it 11 times — and that combined total of 26 is an ACC record for freshmen. They combined for 51 points in the victory over Pittsburgh on Tuesday night — the 11th time this season that two Duke freshmen combined for 50 points. Before this season, it had happened only three times in Duke history.
ON THE WOMEN’S SIDE
There isn’t much parity in the women’s standings, where teams entered Thursday night’s games either really strong — seven teams were at 4-1 or better in league play, including top-ranked Notre Dame (18-1, 6-0) and No. 8 N.C. State (18-0, 5-0) — or really weak. Five teams entered at 0-5 in conference play with two more at 1-4.
___
More AP college basketball: https://apnews.com/Collegebasketball and http://www.twitter.com/AP_Top25