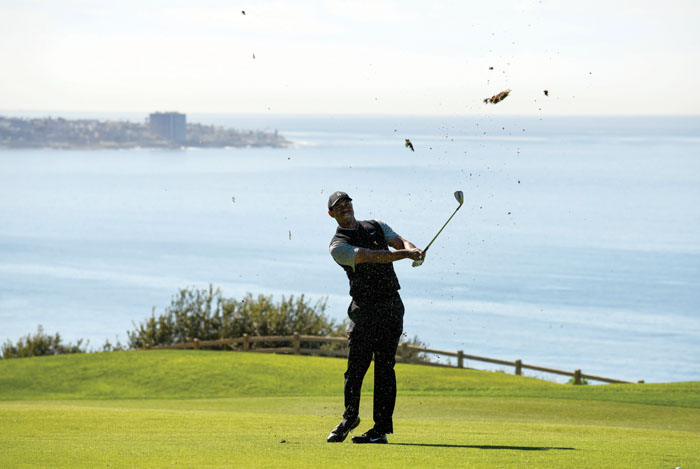 Tiger Woods hits his second shot on the 16th hole during the second round of the Farmers Insurance Open golf tournament on the North Course at the Torrey Pines on Friday, Jan. 25, 2019, in San Diego. (AP Photo/Denis Poroy)

SAN DIEGO (AP) — Tiger Woods doesn’t always have everything go his way at Torrey Pines.
Even when it comes to pizza.
Woods was playing the pro-am at the Farmers Insurance Open when he stopped over for pizza that was being served by 13th tee. One problem: It wasn’t ready for distribution because of a routine health inspection.
“They weren’t allowed to give them out,” Woods said Friday when told the video of his pizza rejection was making the rounds. “They were filling out paperwork at the time. We were the first ones through, so I don’t know.”
The moment was caught on video by Brandon Stone of KUSI. It shows Woods walking up to a table of pizza boxes by Dang Brother Pizza, and a sheepish server having to tell the 80-time PGA Tour winner that he couldn’t serve him.
Woods had a laugh about it Friday after his second straight 2-under 70 left him 11 shots out of the lead.
“We were looking for anything. We were starving,” Woods said. “A couple guys in the group were offering 20 bucks for a box of pizza, and we didn’t get any. So that’s the way it goes.”
Stone later said on Twitter, “Thanks to the 232K that enjoyed this. Sadly, the PGA Tour isn’t one of those, so it’s got to go goodbye.”
The video remained up on the station’s website.