High school basketball: East Rowan girls on the way back 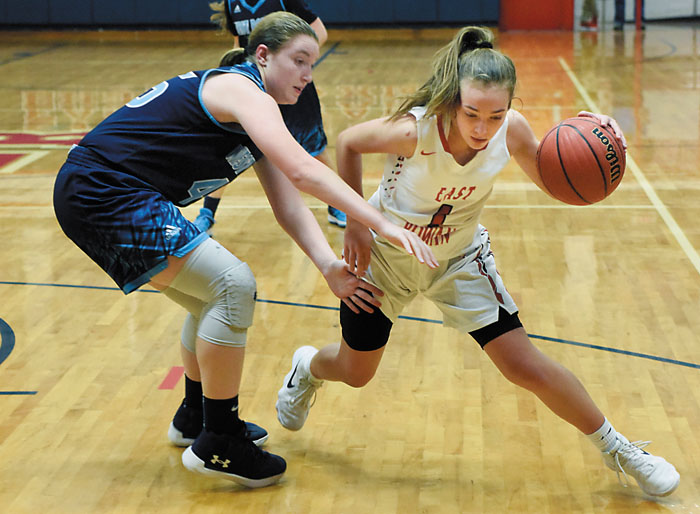 West's Abigail Wilson (45), left, and East Rowan's Adalie Harrison (1). during a game in Granite Quarry. ... Photo by Wayne Hinshaw, for the Salisbury Post.

GRANITE QUARRY — TV cartoons are no longer a staple of Saturday mornings, but tweets from East Rowan girls basketball coach Kevin Holland are.

The latest from Holland: “Saturday morning. 8:00. You already know where we are.”

Holland’s slogan is “get better every day.” So East is in the gym every Saturday morning.  That something you can count on. That’s the case whether it’s after an ugly Friday loss (at Carson), a good loss (at West Rowan) or a breakthrough win (vs. South Iredell).

East’s 63-45 home victory against South Iredell last Friday was significant on a lot of levels.

“It’s the first win I’ve ever had at East after Christmas,” Holland said. “So for me personally, it meant a lot. For the girls it was really, really big.”

The win ended the Mustangs’ 25-game losing streak in conference games  — 13 in the South Piedmont, then 12 in the North Piedmont.

East had dropped 28 post-Christmas games in a row before putting that skid to bed on Friday.

Holland doesn’t cuss and rarely yells. He does make some interesting faces when he’s displeased. He does instill confidence.

Holland’s wife, Susan, is an East graduate and has family here, so East seemed like the ideal place for him to teach social studies, mostly U.S. History, and coach basketball.

The N.C. State graduate had a strong background. He’d been an assistant coach at Raleigh’s Millbrook High on 4A state championship teams.

Holland couldn’t wait to get started, but he was greeted with an impossible situation for the 2016-17 season.

“The SPC was so strong,” he said. “Central Cabarrus had a 2,000-point scorer, Cox Mill had a 1,000-point girl, Hickory Ridge was loaded, Robinson was good, and then there were the Rowan schools. South had Janiya Downs. West had Egypt Alexander, with Abigail Wilson coming in. Carson had Olivia Gabriel and McKenzie Gadson. And we’ve got — well, we’ve got zero starters and 83 total varsity points returning.”

“I can’t really say there was a low point because that whole season was really frustrating,” Holland said. “There was just no way to compete. I spent a lot of time wondering if we would ever be able to. We were young. We were inexperienced. The girls didn’t know me, and I didn’t know them.”

The last win of that season was 52-50 against North Rowan in the seventh-place game in the Christmas tournament. East averaged 31 points, its lowest offensive output since 1970. Among the girls taking a beating two or three times a week were freshmen Adalie Harrison and Caroline Houpe and sophomore Zee Winford. They stuck with it.

It would get worse before it got better. East began the 2017-18 season with seven healthy players. Then Winford got hurt. Then Eagle got hurt. East had a stretch in December when it won four out of five, but the final record was 5-20. The NPC proved even tougher than the SPC had been.  A 49-37 loss to Statesville was the closest the Mustangs came in a league game.  The positive was Holland added Eagle and Brooke Mitchell to the mix as core players. East’s scoring improved slightly to 34 points per game.

“Those girls couldn’t have given me any more than they did,” Holland said. “But we just didn’t have enough.”

While East competed in the 4A ranks for a couple of seasons as recently as 2007, East hasn’t been a large school since Carson opened 11 miles away. It’s a 2A size school now, operating in a 3A league.

There’s not a huge talent pool of players to choose from, so Holland has dedicated himself to making the players he has better.

They’ve also been driven to make themselves better.

“Immediately after last season ended, I had the mindset to really work to be better — to push myself even when no one was around,” Eagle said.

East had a productive off-season and a strong summer.

“We did have a good summer, but you don’t know how much that’s going to carry over,” Holland said. “Everyone doesn’t have all their players in the summer. But we could see the improvement in Grace Eagle. We knew she could be a dependable scorer.”

The 2018-19 season has surprised even Holland. East isn’t all the way back yet, but a comeback has started.

“We’d lost to Central Davidson by 15 last year,” Holland said. “We started looking at that aspect before every game. South Rowan beat us by 30 early last season. This season we beat South in our second game. It’s not so much a revenge thing, but it’s not a bad thing for our girls to play with a chip on their shoulder.”

Harrison, now in her third season as a starter, was second team all-county as a sophomore. She directs the team, handles the ball, hands out the assists and frequently scores in double figures.

“We still mess up a lot, but we have a coach who has never gotten down on us, and that has helped so much,” Harrison said. “He’s been patient, he’s been encouraging, and I’ve grown as a player because of him. Now we’re playing together better as a team than we used to, we’re in better shape and things are starting to fall together for us. And we’ve added Mary (Spry). She’s been huge as a freshman. She gets stick-backs that we didn’t get before.”

East struggled in the Christmas tournament, but still won twice. That was evidence that East is good enough now to win even when it plays poorly.

East finished the tournament at 11-2. Holland tweeted “If you had told me in August that we would be 11-2 at the end of the Christmas tournament, I’m not sure I would have believed you. I know we have a long way to go, but so proud of how far this team has come.”

Next came that rough outing at Carson, but East bounced back strong with the win against South Iredell.

“Beating South Iredell, we know we accomplished something,” Spry said. “I love playing with all these girls, and we’re proving some things. We’re showing that we can be a really good team.”

Holland said Spry, who leads the team in rebounds and blocked shots and is second in steals, has been amazing for a freshman.

“This is a long season that we play, twice as long as a middle school season, and I was worried about Mary hitting that freshman wall,” Holland said. “Instead, she’s picked it up. She’s played her best since we started conference games.”

East has improved dramatically offensively and defensively. East is averaging a respectable 46 points per game, while holding 11 teams under 35.

In addition to the obvious contributions of Harrison, Eagle and Spry, East gets a half-dozen points and rebounds per game from Houpe. Winford rarely scores but has developed into a defensive stopper and a spunky rebounder. Mitchell isn’t always on, but when she’s scoring, as she was against South Iredell, the Mustangs become a very solid team. East’s seniors in addition to Winford, Carmen Fraley and Nicole Fleming, don’t play a lot, but they’ve been around through thick and thin and provide some leadership.

“We’ve got a roster full of great kids,” Holland said. “I think the biggest things for us, as far as our improvement this season, has simply been time. Time is such a huge factor. These girls were freshman and sophomores when I got here. Now they’re juniors and seniors. They’ve worked hard and they’ve stuck with me.”

Holland has no illusions about the six-team league he’s in. Carson and North Iredell are ranked in the top 10 in 3A. West Rowan and Statesville got votes for the top 10 this week.

The trip to South Iredell won’t be a picnic. Any NPC wins will be hard-earned and meaningful.

“We’ve won 12, and when you win 12 that means you can’t do worse than .500 in the regular season,” Holland said. “Now we can talk about trying to make the playoffs and even knocking off someone in the playoffs if we get the right matchup. I just want the girls to compete as hard as they can every night. I want to win them all.”

East has turned the corner despite challenging times. None of the top five scorers are seniors, so Holland’s Mustangs will keep getting better every day again next season.

“We’re thankful for our coach,” Eagle said.  “He never stopped believing in us. That’s why even when we’re tired, even when we feel like giving up, we’re not going to give up.”