Australian Open Glance: A look at the women’s final 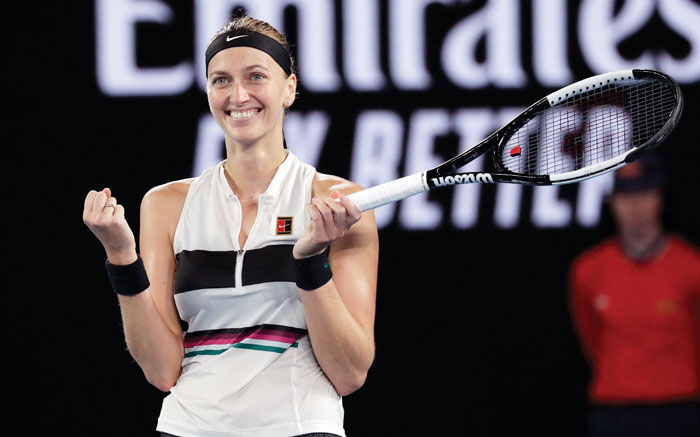 MELBOURNE, Australia (AP) — A quick look at the Australian Open:
LOOKAHEAD TO SATURDAY
Two-time Wimbledon winner Petra Kvitova takes on U.S. Open champion Naomi Osaka in the women’s singles final. The eighth-seeded Kvitova is back into a Grand Slam final for the first time since her title run at Wimbledon in 2014. It’s also the first in what she calls her “second career” following her comeback from injuries to her left hand sustained in a home invasion in December 2016. The fourth-seeded Osaka is on a 13-match winning streak in Grand Slam matches, with her run at Melbourne Park coming in the wake of her first major title at last year’s U.S. Open. Kvitova is on an 11-match winning streak after capturing the Sydney International title this season. The players haven’t met at tour level, but each has a good idea of what to expect. Osaka recalls watching Kvitova win Wimbledon. She’s using her win over another Czech with a big serve, Karolina Pliskova, as preparation for Kvitova. This time, though, the ball will be coming from a different angle. The left-handed Kvitova presents something a little bit different for the 21-year-old Osaka, who is aiming to be the first woman to win back-to-back major titles since Serena Williams in 2015. Kvitova will have to be ready for Osaka’s powerful groundstrokes and growing on-court maturity. The winner will also take the No. 1 ranking for the first time. Osaka is aiming to be the youngest woman since Caroline Wozniacki in 2010 to be ranked No. 1. She’s also aiming to be the first Asian player to hold top spot. The 28-year-old Kvitova, playing her first major final on a hard court, will be the oldest to debut at No. 1 in the women’s rankings in the Open era.
SATURDAY’S FORECAST
Cloudy morning becoming sunny, high of 25 Celsius (77 Fahrenheit).
FRIDAY’S WEATHER
Very hot before a cooling afternoon change, high of 43 C (109 F).
FRIDAY’S RESULTS
Men’s semifinals: No. 1 Novak Djokovic beat No. 28 Lucas Pouille 6-0, 6-2, 6-2.
Women’s doubles final: Sam Stosur and Zhang Shuai beat No. 2 Timea Babos and Kristina Mladenovic 6-3, 6-4.
STAT OF THE DAY
5 — Number of unforced errors from Djokovic in an extremely consistent three sets.
QUOTE OF THE DAY
“Definitely one of the best matches I ever had … on this court.” — six-time Australian Open champion Djokovic on his emphatic win over Pouille.
___
More AP Tennis: https://www.apnews.com/apf-Tennis and https://twitter.com/AP_Sports