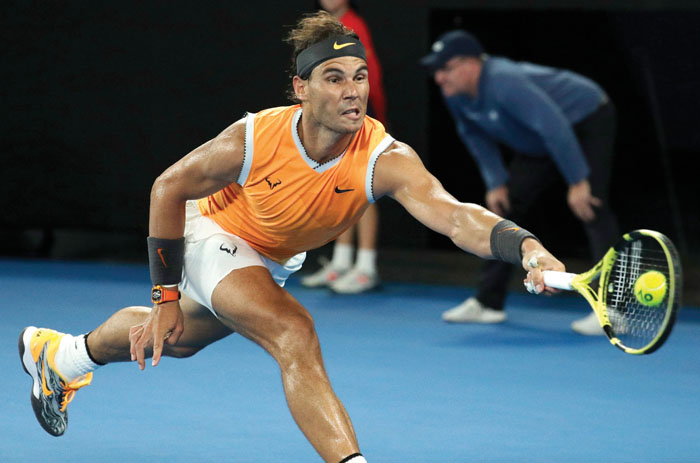 By HOWARD FENDRICH, AP Tennis Writer
MELBOURNE, Australia (AP) — It was fascinating to hear Novak Djokovic explain what it will be like to face Rafael Nadal in the Australian Open final.
“The intensity that he brings on the court is immense,” Djokovic said. “Without a doubt, probably the most intense tennis player that I have witnessed and played against.”
Hmmm.
“It makes you be alert, so to say, from the very first point,” Djokovic said. “He doesn’t allow you to kind of ease your way into the match.”
All sounds rather similar to the way someone might describe competing against Djokovic.
When the No. 1-ranked Djokovic and No. 2 Nadal meet Sunday night at Rod Laver Arena for the tournament championship, there will be differences, right down to the most obvious: Djokovic is a righty, Nadal a lefty. The similarities are far more compelling, among them an ability to go from suffocating defense to “How did he put the ball there?!” offense by aggressively staking out territory at the baseline, and an unwavering commitment to playing every point with full effort and desire, as though the ultimate outcome of the match hinged on each racket swing.
This matchup is their 53rd, the most between two men the professional era. Djokovic leads 27-25.
It is their 26th on a hard court. Djokovic leads 18-7.
It is their 15th at a major, equaling the record. Nadal leads 9-5.
It is their eighth in a Grand Slam final. Nadal leads 4-3.
It is their second in an Australian Open final. Djokovic won a five-setter in 2012 that lasted 5 hours, 53 minutes, the longest Slam final ever.
“Nadal has historically, throughout my life and career, been the greatest rival that I ever played against, on all the surfaces. Some matches that we had against each other were a great turning point in my career. I feel they have made me rethink my game,” Djokovic said.
“I had some disappointing moments where I lost to him. … I won, also, some great matches. Those kind of encounters have also made me the player I am today, without a doubt,” the 31-year-old Serb said. “These are the kind of matches that you live for, finals of Slams, playing the greatest rivals at their best. What more can you ask for?”
Djokovic is to collect a record seventh Australian Open title, breaking a tie with Roy Emerson and Roger Federer.
That would lift his Grand Slam haul to 15, pushing Djokovic one ahead of Pete Sampras.
The only men with more? Federer is at 20, Nadal at 17.
For Nadal, this represents a chance to cut into Federer’s lead and become the third man with at least two championships at each major. The 32-year-old Spaniard’s previous title in Australia came in 2009; he’s lost three other finals, while Djokovic is 6-0.
Both were outstanding in the semifinals. Nadal beat 20-year-old Stefanos Tsitsipas 6-2, 6-4, 6-0; Djokovic defeated 24-year-old Lucas Pouille 6-0, 6-2, 6-2.
Tsitsipas on Nadal: “Just has a talent to make you play bad.”
Pouille on Djokovic: “Not so many players can beat him, for sure. Maybe one or two.”
He put Nadal in that category, and it’s easy to see why. A tweaked serve and that lasso of a forehand are making Nadal as dangerous as ever; he hasn’t dropped a set in Melbourne.
And to think: He is coming off a series of injuries on unforgiving hard courts.
Nadal retired from his Australian Open quarterfinal last year because of a right leg problem; stopped again during his U.S. Open semifinal in September with pain in his right knee; had offseason surgery on his right ankle; pulled out of a tuneup tournament this month because of a bothersome thigh.
He was rusty. He acknowledged being a “little bit worried” because of “issue after issue.”
“After four, five months without action at all,” Nadal said, “then, of course, you know that you can come here and anything can happen, no?”
Djokovic dealt with his own health scare: A sore right elbow that cost him the last half of 2017 and contributed to a fourth-round loss in Melbourne a year ago before he had an operation.
Like Nadal, Djokovic is once again at the top of his game.
They’re ready to resume their rivalry.
“Hopefully,” Djokovic said, “we’re all going to have a good time.”
___
Follow Howard Fendrich on Twitter at http://twitter.com/HowardFendrich
___
More AP Tennis: https://www.apnews.com/apf-Tennis and https://twitter.com/AP_Sports

Australian Open Glance: A look at the women’s final