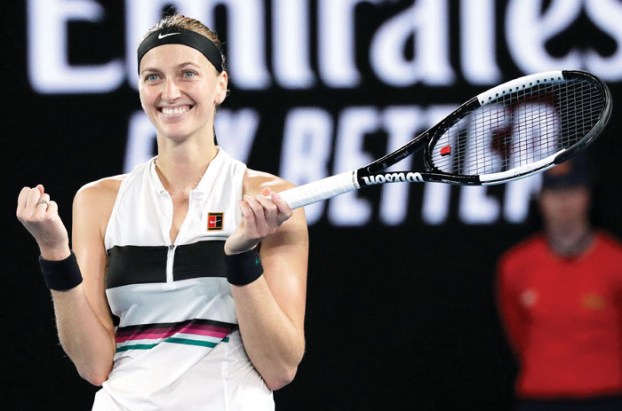 MELBOURNE, Australia (AP) — Two years ago, Petra Kvitova missed the Australian Open, just weeks after her racket-holding left hand was stabbed by an intruder at her home in the Czech Republic.

Two days from now, back at her best during what she calls her “second career,” Kvitova will play for the championship at Melbourne Park.

Taking control after the court’s retractable roof was closed as the temperature soared toward 100 degrees (38 Celsius) Thursday, the No. 7-seeded Kvitova surged to a 7-6 (2), 6-0 semifinal victory over 35th-ranked American Danielle Collins.

“It means everything,” Kvitova said of reaching her first major final since the December 2016 knife attack that led to hours of surgery on her hand.

Kvitova stretched her winning streak to 11 matches and has a chance to rise to No. 1 in the WTA rankings if she can collect her first Australian Open title to go alongside the two she earned at Wimbledon in 2011 and 2014.

It was Pliskova who saved four match points and came back from 5-1 down in the third set to stun Serena Williams in the quarterfinals.

Against Collins, a two-time NCAA champion at the University of Virginia who was 0-5 at major tournaments until last week, Kvitova was more aggressive throughout, mixing big lefty forehands and well-timed pushes forward to the tune of a 30-9 edge in total winners.

But the key to the outcome might very well have been what happened at 4-all after 35 minutes of action: That’s when the decision finally was made to close the 15,000-seat stadium’s cover, drawing cheers of approval from broiling spectators.

Kvitova probably wanted to applaud, too.

“I was happier than the fans that the roof closed,” she said afterward. “I like to play indoors. It helped me a little bit.”

She’s made clear over the years she is not a huge fan of playing in stifling heat. Not too many people truly are, of course, but someone like Collins, a 25-year-old from Florida, might be more used to that sort of thing.

The match was suspended for about five minutes and when play resumed, it went from being completely even to tilted in Kvitova’s favor. She dominated the tiebreaker and the second set.

The chair umpire was Carlos Ramos, the official who penalized Williams a game in last year’s chaotic U.S. Open final, and Collins got into a couple of testy exchanges with him.

First in the tiebreaker, then in the opening game of the second set, Collins protested that Ramos was applying rules differently than umpires had in her earlier matches.

Whether or not there was merit to what she was saying, it seemed clear that the back-and-forths with Ramos didn’t help Collins.