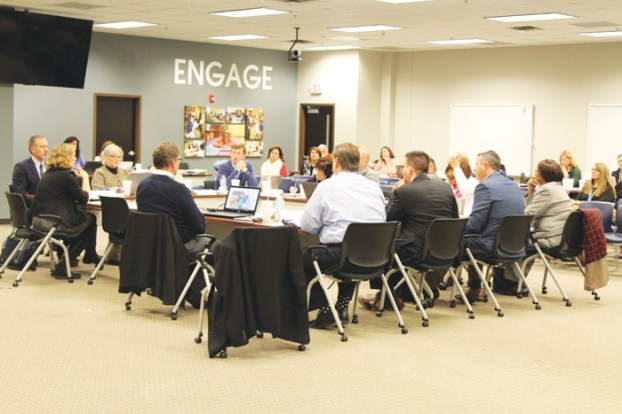 The school board gathers on Wednesday to discuss community concerns about consolidation. Andie Foley

SALISBURY — Through five community-input sessions, 11 days of online surveying and 15 emails, members of the Rowan-Salisbury community have weighed in on a proposed consolidation plan that could close 11 schools.

All told, according to Andrew Smith, the school system’s chief strategy officer, just more than 2,700 responses were received, with several prominent themes rising to the surface. Smith presented these to members of the Board of Education during a day-long retreat Wednesday.

Responses from the community sessions showed commonalities within individual districts as well as throughout Rowan-Salisbury at large, Smith said, though some concerns were the result of confusion or miscommunication.

In Salisbury, residents expressed unease about the possible merger of Knox Middle and Overton Elementary schools.

Additionally, people worried about younger grades sharing a space with older students in the merger. Smith said school staff had tried to address this fear during input sessions: the elementary and middle school parts of the school would be separated by offices for administrative staff.

More misunderstandings were seen in other districts, Smith said. In the East community, respondents were hesitant about the idea of closing and consolidating Faith, Rockwell and Granite Quarry elementary schools.

Smith said residents were concerned that combining the schools would create an elementary site with more than 1,000 students. But redistricting would lighten this potentially daunting load, he said.

Would classified and certified staff leave the district altogether because of strain? Would students be able to transfer into new schools without disruption of violence? How would the closure of certain sites affect home and land values of the neighborhoods?

These questions are legitimate, Smith said, especially when one considers how the consolidation plan pushed a different sort or priority than had been promoted in years past.

“We ask the parents and students to love their schools, to embrace them, to go to Friday night football,” he said. “Now we’re saying, ‘We need you to think about dollars and cents.'”

In 526 responses to the question “Hhow could we more effectively utilize our facilities?” some 20 percent spoke of renovations or upgrades.

Another popular route? Redistricting. Respondents wanted to see each elementary, middle and high school have the same number of students.

A surprising 64 percent of responses expressed support for consolidation in some form.

“Almost half of our staff would say something needs to be done, that they agree on some level with the plan,” he said. “Students who would agree are the next closest: about a fourth of them agree with the plan. Parents are right behind them.”

Community members at large — the ones least likely to be inside the schools and seeing their daily operations — were least likely to agree with consolidation, said Smith.

“As you get closer to the situation, you see it a little bit differently.”

SALISBURY — Feel the tropical warmth of 88 degrees. Imagine moving gently in a heated pool of 86 degrees. The... read more